India is one of the largest export destination of Chinese goods. In 2019, India stood at 7th position as China’s export partner in the world. In fact, India is highly dependent on Chinese commodities including electronics, pharma products, machinery, vehicles, plastics and many more. According to India import data, India imports from China valued USD 68.4 billion in 2019, which slightly declined as compared to the previous year. Now India has taken certain steps to reduce the dependency on Chinese goods, especially after border tension with China in June. After banning more than 50 Chinese apps, India has restricted imports of tyres from China. Let’s analyze current & past scenario of India’s imports of tyre from China with India import statistics of tyres.

Domestic operations of Germany’s premium automobile manufacturing companies – Skoda Auto Volkswagen, BMW and Mercedes Benz could be adversely impacted in the coming weeks as a consequence of India’s decision to put restrictions on import of certain type of tyres. This step was taken to reduce dependence on China.

Due to Coronavirus pandemic, which originated in China last year and military face-off on Indo-China border; India has taken several decisions on cutting down trade with China. Early this month, India banned more than 50 Chinese apps after violent fight between Indian and Chinese soldiers on the border, which claimed 20 lives of Indian soldiers last month.

India’s Imports of Tyres from China in Last 10 Years 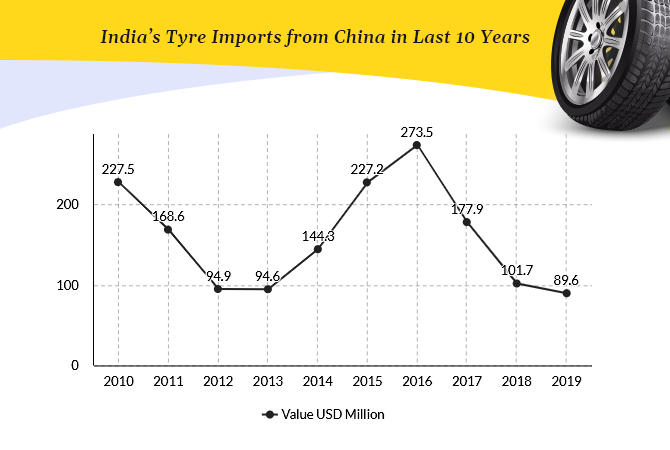 India imported tyres the most from Thailand in 2019, followed by China. In fact, both Thailand and China are the major import sources of tyres for India, which shared 26.1% and 23.3% value to total imports in the said year. Below given chart and table shows India’s top 10 import partners of tyres with percentage share recorded in 2019. 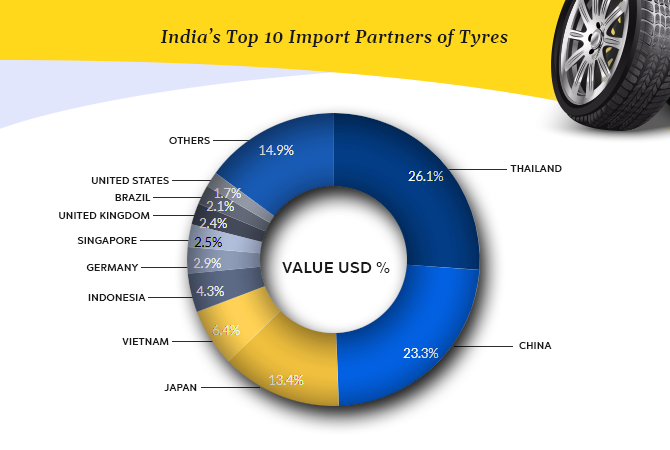 Indian Prime Minister Narendra Modi brought up the importance of local manufacturing and consumption of locally produced commodities, stating that Indians needed to become “vocal for local”. He also said that India is required to become “self-reliant India” after reducing its dependency on Chinese goods. After putting restrictions of imports of tyres from China, Indian government may soon be taking other measures to curb imports from China.