Imports of vegetable oils in India has seen a rise of 34% for the month July, 2017 at 15.24 lakh tonnes. The vegetable oil import in the month of July 2016 stood at 1.14 lakh tonnes. According to Industry data, the rose on higher shipments of cheaper refined palm oil and rupee appreciation in last six months. The value of rupee in last six months contributed to the imports of vegetable oils. The vegetable oil includes both edible and non-edible oil. Edible oil imports rose to 14.89 lakh tonnes last month from 11.18 lakh tonnes in July 2016. It went up to 11.10 million tonnes during the first nine months of 2016 from 10.78 million tonnes in 2015 of same period. The soyabean and groundnut are being sold below the minimum support price while the prices have fallen between 20% and 30% from last year.

India is biggest buyers of vegetable oils in the world and it has also raised import tax to protect local oilseed farmers from cheaper imports from top suppliers like Malaysia and Indonesia. The Indian government has raised the import tax on crude soya oil from 12.5% to 17.5% respectively. It doubled the import tax on crude palm oils to 15% and raised the import tax on refined palm oils to 25%. The current prices are the lowest in last five years and farmers are disappointed to sow the oil seeds as it is reflected in switching from oilseeds cultivation to other crops. It is the reason to encourage local processing after increasing the import duty 10%. This will make domestic refining competitive and helps to push the revolution of Make in India. Also, check Import Duty on Vegetable Oils in India.

India Stood as Largest Vegetable Oil Importer in the World

India is top in the vegetable oil exporters in the world and recorded USD 10 billion from vegetable oil imports during the year 2016. However, India is followed by China and USA which are next in the list of top vegetable oil importing countries across the world. India’s import represents 12% of world imports for this product. India is importing vegetable oils mainly from Indonesia, Argentina, Malaysia and Ukraine. Approximately 35% of vegetable oils in India has been imported from Indonesia during 2016 and recorded import value of USD 3696 million during this period. India planned the strategy to reduce the import from foreign countries which seems a positive growth in Indian economy. It didn’t increase the vegetable oils imports as it registered zero percent growth in imports since 2012. Refer the below table to check the top countries from which India is importing vegetable oils and its cleavage products. 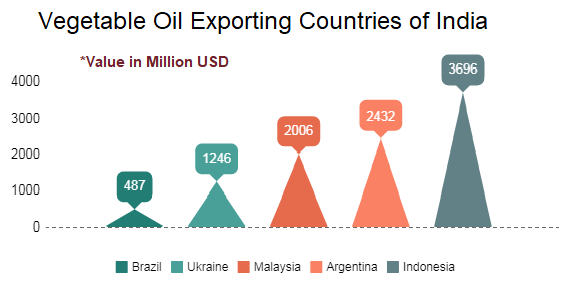 You can check the India Import Data of Vegetable Oils with complete shipments details. Also, you will get the trade report which covers importers list, total quantity imported, exporter country etc.

Want to buy vegetable oil or edible/non-edible oil? Well, it depends on the suppliers of foreign countries. You must be aware of exporting countries with their company names which are active for Indian buyers. Let’s go through the sample data of vegetable oil imports in India in the given table below.

In our trade report, you will get the company details and more columns like port of loading or discharge, origin country, total quantity, price etc.