India's Tea Exports Declined, Whereas China Emerged On The Top

India is the largest consumer of tea, especially black tea. As per import export data 2020, it is also the biggest distributor with 8.8% share value among top exporting countries for tea in the world. However, recent reports suggest that tea exports from India declined way more than 2020. The coronavirus-induced economy has resulted in several commodities’ low production and imbalance mechanisms of the Indian economy. This has impacted exports of India’s tea along with other significant reasons.

According to a study conducted by Global Scientific Journal titled “Indian Tea Scenario”, black tea production in India grew over a 1.6% CAGR and consumption increased to 2.3% CAGR for the period of 2008-2013. As per these reports, the overall tea exports of India have been a major issue since the collapse of the USSR in 1991. You can obtain information on import and export of India and other countries, including additional information concerning in-depth analysis of your subject regarding imports and exports of any commodity from Export Genius. 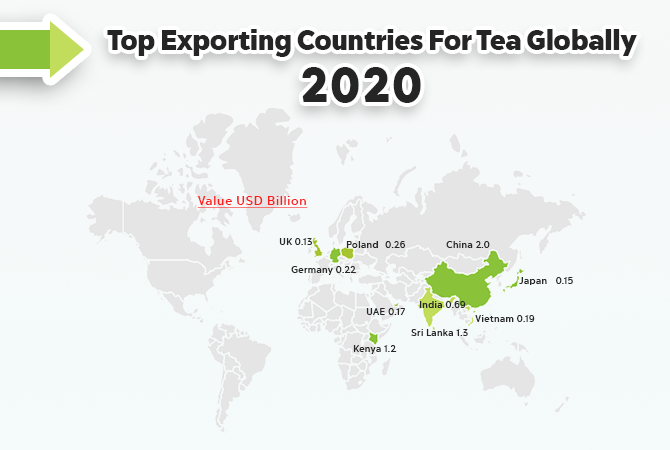 Below given tea exports of India for years 2020 and 2021 respectively, representing country-wise top exports for the time period January-May with their individual quantities exported (in unit million kilograms). As we can see in the comparison table below, Russia and Iran have been the two top exporting partners for India in tea exports for 2020 and 2021. While the United States of America and United Arab Emirates are interchangeable in the consecutive year (2021). The 5th top country for both years is different — China in 2020 and Germany in 2021. This is to be duly noted that each value of quantity given in the respective rows with their corresponding countries are declining in the year 2021. 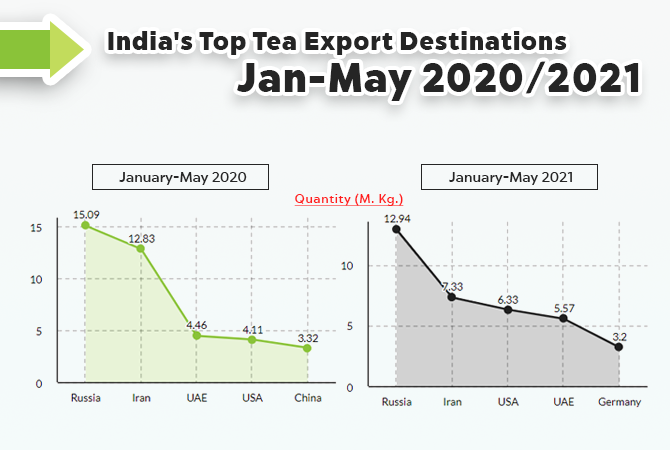 India’s tea exports are frequently declining in the year 2021 due to several reasons including: lack of product mix variety, the majority of production sold for domestic consumption, violation of GI tags, and high prices of CTC brew, almost linear price fluctuation in major international markets, etc.

Looking for in-depth analysis of tea imports and exports in the international markets and global trade flows? Is it in concern to a particular country, or even multiple countries? Contact us to get important information on tea and many other commodities’ trade and their ongoing market trends.