India is known as the home of spices as it has long history of trading with the ancient civilizations of Rome and China. Today, Indian spices are the most sought-after in the world, given their texture, taste, aroma and medicinal value. India produces about 109 varieties of spices listed by the International Organization of standardization and export them around the world. That is why Indian spices are great in demand globally and countries like China import Indian spices extensively.

China has emerged as the No.1 export destination for Indian spices. Despite coronavirus pandemic and supply chain restrictions in 2020, China’s imports of Indian spices have increased and reached to USD 581.2 million in the said year. This value is calculated on the basis of four HS Codes namely, HS Code 0904, HS Code 0909, HS Code 0910 and HS Code 0908. See India export statistics of spices to China recorded in the last three years. 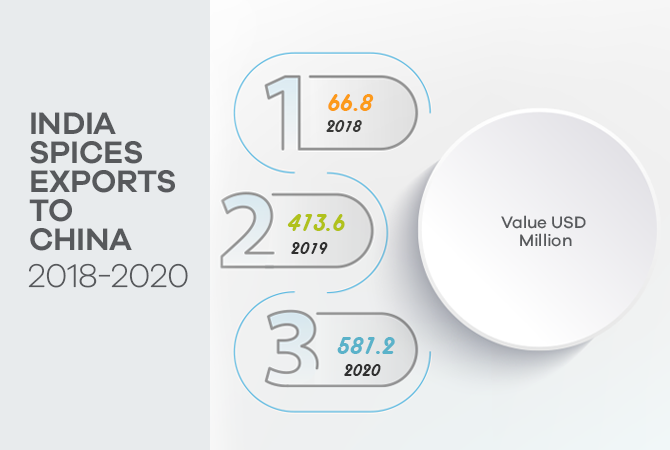 China loves Indian hot chilies as the country imported around 1.4 lakh tonnes of chilies from India in FY 20 from a meagre 10,000 tonnes in FY 18. Indian spice industry experts said that China doesn’t grow red chilies similar and is dependent on Indian varieties such as Teja, Sannam and Bydagi that are only available in India. Below given chart shows dollar amount of India spice varieties (on four HS Codes) exported to China in 2020. 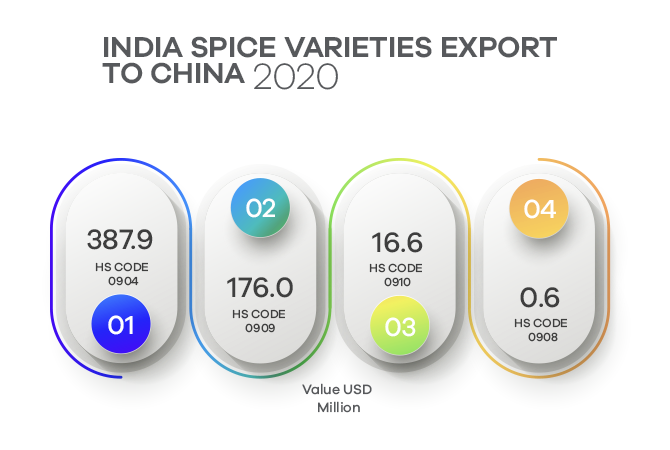 India Spices Exports to the World by Year

India is the net producer and exporter of spices in the world. India’s spices exports to global countries have also increased in 2020, despite Covid-19 pandemic. Last year, spices exports from India breached the mark of USD 2,000 million. Below given chart shows dollar amount of India spices exports to the world during 2018-2020. 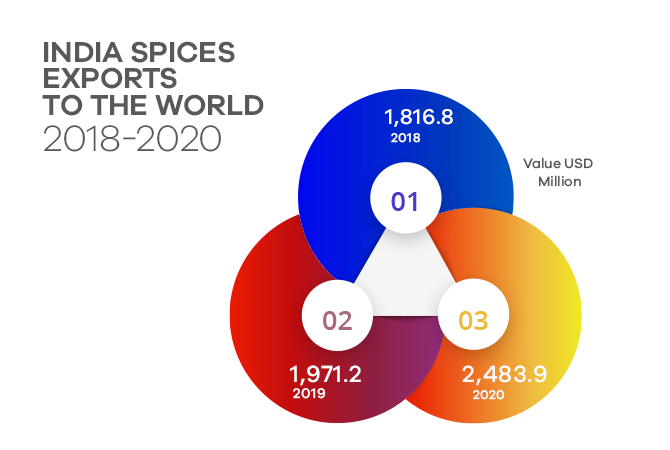 China has emerged as the No.1 export destination for Indian spices over the last two fiscals, surpassing the United States. Besides China, demand of Indian spices is also rising from countries in Africa, South Asia and West Asia. According to India trade data, India’s top 10 export partners of spices accounted for 87.2% to overall value of shipments recorded in 2020. 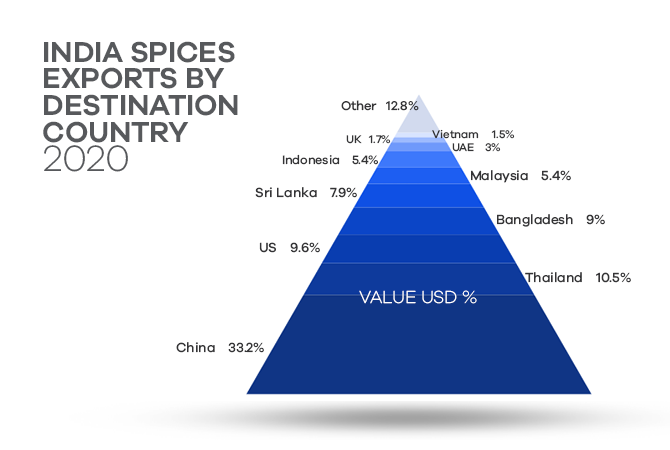 According to Spices Board India, spices exports continued to witness an upward trend in FY 21, despite the Covid-19 pandemic. The estimated exports of spices and spices products from 2020-21 is 15,65,000 tonnes, against 12,08,400 tonnes in the previous fiscal. Total chili exports in 2020-21 were 6,01,500 tonnes, up 21% in quantity. Last year, it was 2,64,500 tonnes. Besides chili, other spices that have witnessed a major increase in exports were turmeric, cardamom, ginger and spice seeds such as cumin & fenugreek. The Spices Board is coordinating with Indian Embassies to promote Indian spices brands in the overseas markets. Let’s see how much Indian spice industry will grow in 2021.