India imports for toys and games dropping this year, while exports are skyrocketing with gradual growth. It has been all possible due to the initiative taken by the government of India under “Make-In-India” campaign name. The total imports of toys, sports, and games (Chapter 95) in India amounted to $380.27 million for 2021. On the other hand, the total exports from India for toys, sports, and games in 2021 amounted to $516.51 million.

Top Exports By India – By Commodity 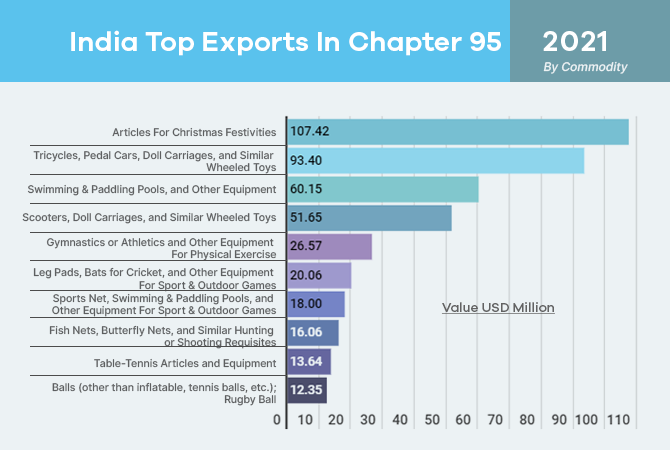 Top Imports By India – By Category 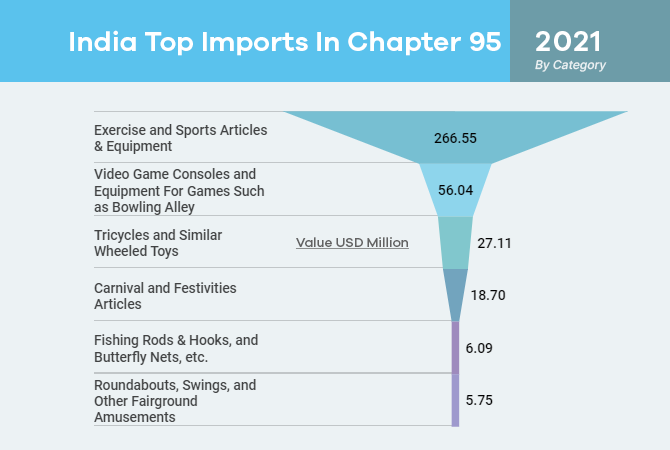 The below table shows the comparison between the imports and exports of India for products consisting of Heading 9505. Heading 9505 consists of “Festivities/Entertainment Articles”. The data is segregated into yearly values and shows corresponding import and export for each year.

The below table shows the comparison between the import and export of India for the products falling under the HS Code Classification of Heading 9504, i.e., “Video Game Consoles & Machines, and Casual Games Equipment”, on the basis of yearly values, from 2017 to 2021.

The below table shows the comparison between the import and export of India for the commodities falling under Heading 9503 – “Tricycles, Doll Carriages, and Similar Wheeled Toys”. The values are segregated into the yearly basis for both imports and exports.

India Imports and Exports In 2022

India’s imports and exports for toys, games, and sports—Chapter 95 by India, are shown below in the table, following a time period of 5 months from January to May in 2022. The shown products are segregated into the categories of products, and are not the exact commodity.

The imports of articles and equipment for general physical exercises accounted for the highest amount of imports with an import value of $108.17 million, followed by the imports of tricycles, and similar products with a value of $19.34 million. The total imports amount to $155.8 million.

The exports of articles and equipment for general physical exercises accounted for the highest exports among all the categories, with an export value of $85.17 million. The values of exports for tricycles and similar wheeled toys are of significance, standing at $59.58 million of worth.

While the total value of imports in 2022 so far amounted to $155.8 million, the total export value amounted to $216.43 million. The difference between imports and exports stood at a value of $60.58 million, with a percentage of 38.87%, signifying an increasing value for exports.

The government of India is constantly growing into its domain of self-reliance under the campaign of “Make-In-India” by promoting locally manufactured goods and encouraging domestic manufacturers to boost both the quantity and quality of production.