India has resumed exports of tea, rice, coffee, and fruits to Russia. Exports of marine products and confectionery shipping will also be restarted. Exports were stalled amid the uncertainty that followed Russia’s invasion of Ukraine that began on 24th Feb 2022. The immediate demand is for food as Russian stores are emptying out because of sanctions imposed on the country and the ban on supplies by the European Union.

Understanding India’s stance on the war in Ukraine is complex. India’s decision to avoid taking a clear-cut position stems from a dependence on Russian goods including crude oil, energy goods, and metals. Recently India imported discounted crude oil from Russia. Here’s an analysis of India’s exports of tea, rice, coffee, and fruits to Russia in 2021.

Russia is a major market for Indian tea, importing 43-45 million kg annually. In terms of value, India exported US$95 million worth of tea to Russia last year, rice worth US$69 million, and coffee worth US$6.5 million. As the United States, the United Kingdom, the European Union, and the G7 nations have put sanctions on Russia over its invasion of Ukraine; Russia finds hope from India to deal with the rising demand for food products. Checkout quarter-wise values of India’s exports of tea, rice, and coffee to Russia recorded in 2021. 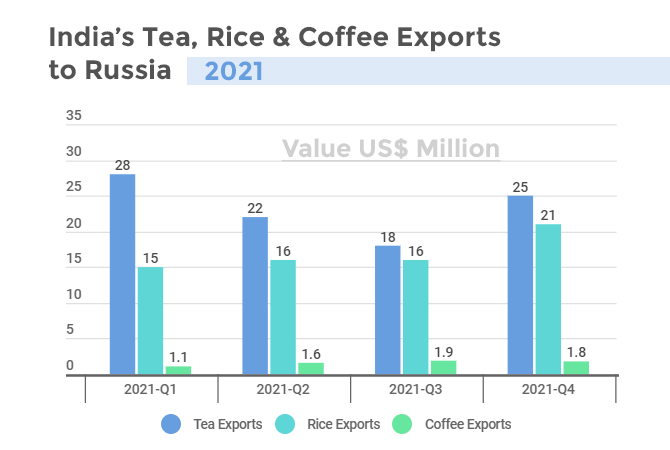 In fruits, Russia mostly imports grapes from India. India shipped US$39 million worth of grapes to Russia in 2021. However, if we see quarter-wise values, we found that Russia’s imports of Indian grapes fell drastically in the second half of 2021. 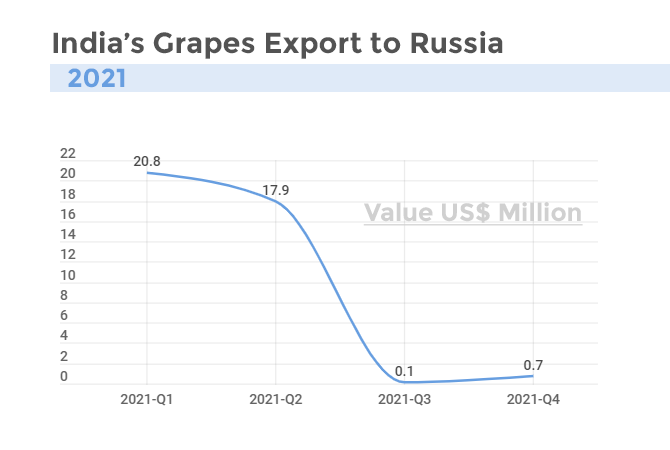 Which edible fruits does Russia import from the world?

Russia is dependent on other countries for four major kinds of fruits, namely citrus fruits, bananas, apples, pears, quinces, fresh strawberries, raspberries, blackberries, and grapes. Russia’s imports of these fruits totaled US$4,003 million in 2021. Russia imported US$1,260 million worth of citrus fruits, US$1,074 million of bananas, US$675 million of apples, pears & quinces, US$524 million of fresh strawberries, raspberries, blackberries, etc., and US$470 million of grapes from the world last year. Here are the quarter-wise values of these fruits. 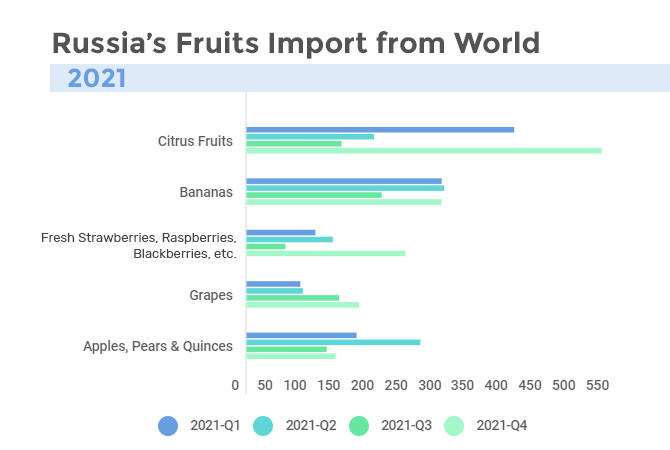 As Russia is dependent on Indian tea, rice, coffee, fruits, and other products; India also relies on Russian commodities such as nuclear weapons, and energy goods including oils and gas. That’s why India is not taking a strong position on Russia’s invasion of Ukraine. And it looks both the countries would continue to do trade as usual in future as well.