India Imports of Olive Oil from Spain and Italy in 2017

India largely imports olive oil from Spain, Italy and Turkey. There are about 90 brands that compete with each other. The top three olive oil brands in the domestic market, which together control more than 70% share are Figaro, Borges and Leonardo. In order to safeguard domestic industry of olive oil, the Government of India has raised import duty rates on crude extra virgin olive oil from 12.5% to 30% and on refined olive oil from 20% to 35%.

If we look at Export Genius report on India’s imports of olive oil in 2017, the country purchased olive oil worth USD 54 million, which increased from 2016’s USD 42 million. One of the main reasons of growing demand of olive oil in India is that olive oil is the cornerstone of a Mediterranean diet and not only a taste enhancer but it is also packed with great health benefits. For example, diet rich in olive oil reduced the risk of type II diabetes by almost 50% compared to a low fat diet.

India mostly imports olive oil, among other types including extra virgin olive oil and virgin olive oil. Spain is the largest supplier of olive oil (HS Code 15099010) to India, followed by Italy and Tunisia. Here is the list of top 5 countries from which India imported olive oil in 2017. 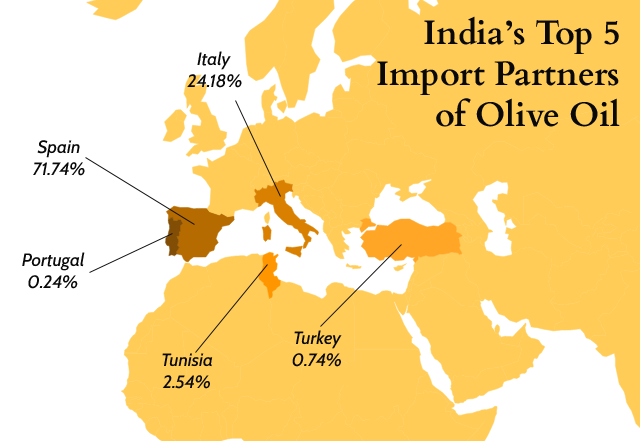 Due to rising demand, imports of olive oil into have been rising since 2013. From USD 24 million in 2013, the figures have jumped to USD 39 million in 2017. As per report, India Imports of Olive Oil 2017, increasing awareness about benefits of healthy olive oil offers exciting growth opportunity to the Spanish brand in India. The country imported olive oil of Figaro brand the most from Spain, which amounted to 30.88% in 2017. The highest shipments of olive oil worth USD 20124857 were arrived at India’s Gujarat state from Spain. Its share in value recorded 36.76%. Among olive oil importers in India 2017, Consumer Marketing (India) Pvt. Ltd. tops the charts with 36.69% share in value. So, 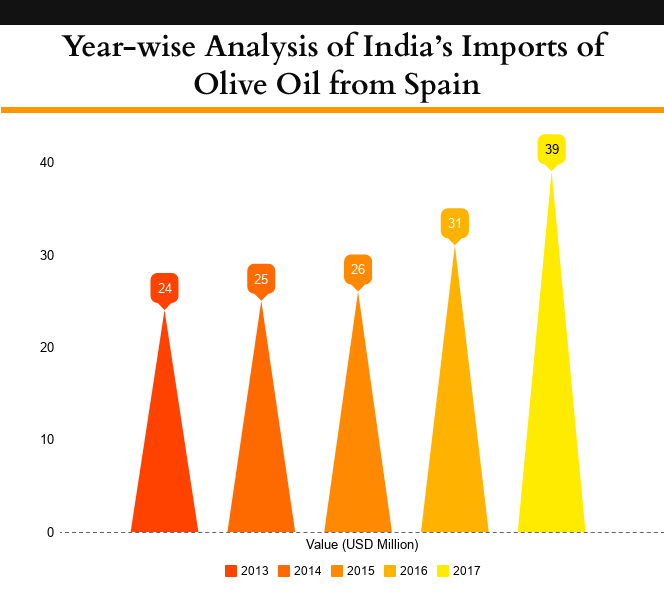 Spain has the largest number of olive oil suppliers as it holds more than 70% market in the world. if you as an olive oil exporter in Spain want to supply the oil into India, our report can help you in finding trusted olive oil importers in Mumbai city of India or any other city or state. Look at the sample below to know which fields we cover in India import data of olive oil from Spain.

Italy stands as the 2nd largest India’s import partner of olive oil, which supplied oil worth USD 13 million to India during 2017. If we look at yearly values, India’s imports of olive oil from Italy have been decreasing since 2013, but it rose in 2017. India purchased olive oil of Bertolli brand the most in the said year. The highest olive oil shipments of over USD 9 million from Italy arrived at Delhi. Among buyers of olive oil in India, Cargill India Pvt. Ltd. purchased maximum oil from Italy, which recorded 8.39% share in value last year. 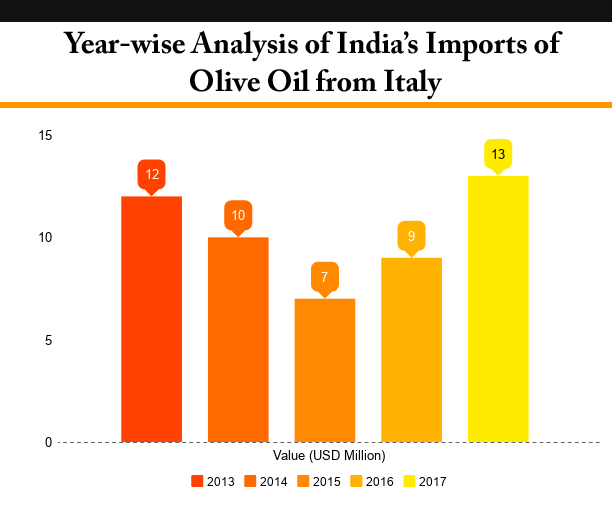 And if you are a leading supplier of olive oil in Italy and want to export your product into India, our report can give you a list of active olive oil importers in Delhi or Chennai or any other Indian city. Here is the sample of India imports of olive oil from Italy.

Today, Indian consumer has become health conscious and is not shying away from splurging on relevant products like olive oil. That is why the demand and imports of olive oil into India have been increasing with most demand of Spanish olive oil brands. In fact, olive oil consumption has increased five times from last ten years and there is a large probability for boosting its acceptability due to high value index.