India has become a significant market for olive oil (HS Code 1509) in the recent years. It is due to increased awareness about the numerous health benefits of olive oil. It is no longer perceived as a rich man’s fancy food, but a truly healthy food. However, the use of olive oil and awareness about its health benefits are largely restricted to the upper and middle economic groups of the society in the Indian urban areas. A very large portion of the Indian market is still waiting to be tapped from the olive oil industry.

In union budget 2018, Finance Minister of India Arun Jaitley has announced a hike in the import duty rates on crude extra virgin olive oil from 12.5% to 30% and import duty rates on refined olive oil from 20% to 35%. View Indian Custom Duty. This move was appreciated by corporates in edible oil sector as it would safeguard domestic industry. However, the hike was criticised by the India Olive Association strongly. IOA President VN Dalmia objected the decision and said, “This is not a crop of India and farmers do not need protection by imposition of import duty. Prices of other edible oils may have declined, but olive oil prices have not experienced any such trend.” He also said that successive droughts in the producer countries mainly Italy and Spain had seen the landed price of olive oil in India in the past few months. If we compare Indian import duty on olive oil with other non-olive oil producing countries, Taiwan and South Korea levy 8% while China levies 10% import tax on olive oil.

As per India import data of olive oil, total imports of the product valued at USD 54753971 during 2017. The country received maximum shipments of olive oil in May month, which recorded 14.53% share in value. Here are monthly values of olive oil imports into India. 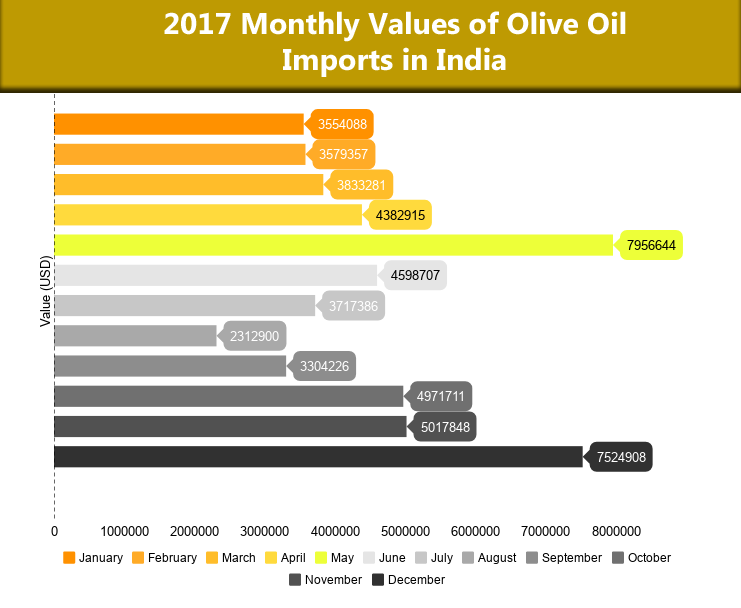 India’s imports of olive oil in edible grade, which comes under HS Code 15099010, recorded the highest value in 2017. It recorded USD 37679820 import value. Here is the list of HS Codes in which olive oil types are categorized with their import figures. 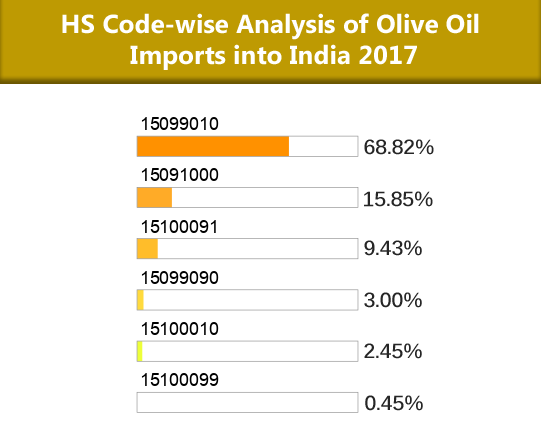 Olive Oil is the Largest Type Imported into India 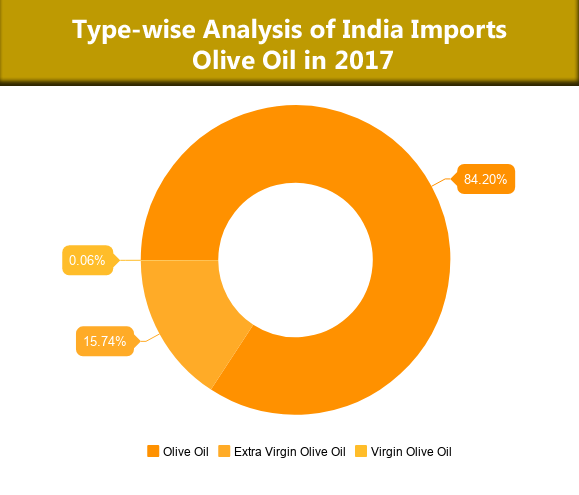 India purchased olive oil of Figaro brand the most in 2017, which was followed by Borges, Bertolli, Disano and Solasz. The largest type of oil imported of all these brands was olive oil. Here is India shipment data of these brands recorded in the said year. 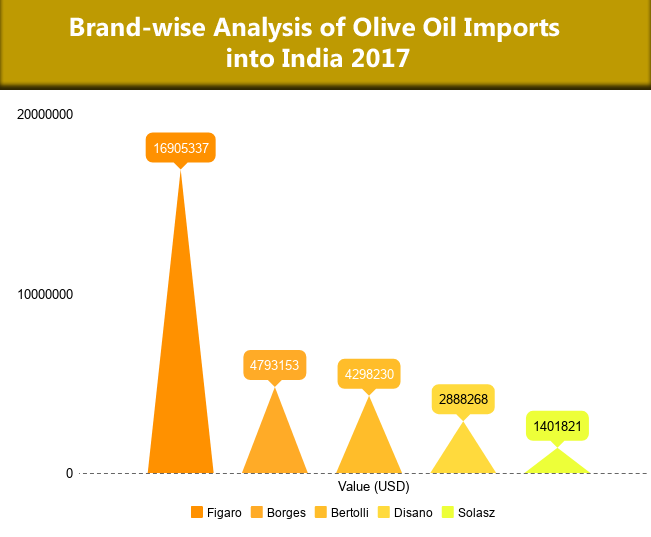 Delhi Received the Highest Number of Olive Oil Shipments in 2017

Delhi is the largest area in India, which imports olive oil the most. As per Export Genius 2017 report on olive oil import data of India, Delhi received the highest number of olive oil shipments in the said year. It shared 42.46% value to total olive oil imports. Delhi was followed by Gujarat, Maharashtra, Tamil Nadu and Punjab. Olive oil importers in Delhi purchase the product in huge quantity from countries around the world, particularly Spain. Here is the list of top 5 Indian states that imported olive oil in 2017. 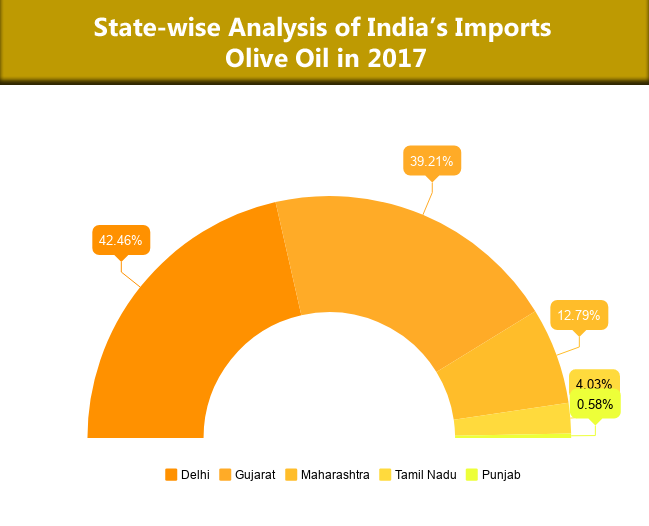 If you want to get complete list of buyers of olive oil in India, you can buy our India import data of olive oil with authentic shipment records. For your reference, a sample is given below that will make you understand about the fields.

Where to buy olive oil? Spain is the world’s largest producer of olive oil from where you can import the product into India. Spain and Italy continued to dominate Indian imports of olive oil during Jan-Dec 2017 providing 71.74% and 24.18% respectively. Here is the list of 5 largest countries from where India imported olive oil the most during 2017. 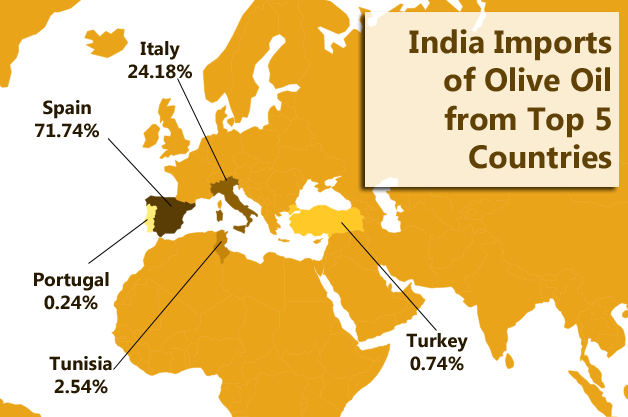 Among Indian ports, Nhava Sheva Sea received the highest number of olive oil shipments during 2017. It is also known as Jawaharlal Nehru Port or JNPT. Here is the list of top 5 ports of India where shipments of olive oil arrived in 2017. 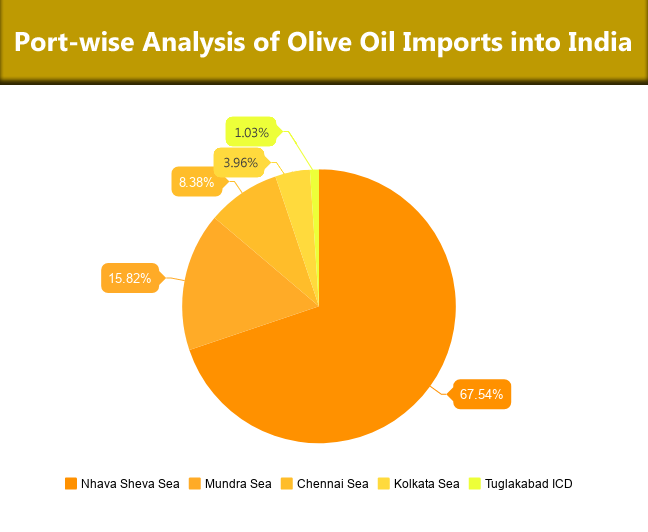 The olive oil industry in India received a major boost in 2007 with the formation of the Indian Olive Association (IOA), which became the apex body for producers, importers and consumers of olive oil in India. The aims of IOA is to promote the consumption of olives and olive oil & expanding the market, represent the industry in front of the government, increase awareness about the health benefits of olive oil, introduce standardization in the industry & market and establish procedures to assure accurate labelling for the various grades & types of olives & olive oil.

Why to Buy Export Genius Report on Olive Oil Imports into India 2017?

1.  Our report helps foreign companies in finding the trusted Indian buyer of olive oil for exporting the product.

2.  Indian importers of olive oil can find active suppliers in Spain or any other country from our data.

3.  Companies of olive oil can monitor shipments of their competitors from customs details.

4.  Businesses can analyse the market components such as price, quantity, etc. for better company decisions.

5.  Logistics companies can reach out to new customers by knowing largest Indian and foreign ports managing shipments of olive oil.

6.  Banks can increase number of customers by getting information of top Indian companies importing and foreign companies exporting olive oil.