India, the world’s largest pulses producer and consumer of pulses has opened up import of moong, tur and urad after a gap of three years. According to the Indian Pulses and Grains Association (IPGA), a minimal 250,000 tons of tur, 150,000 tons of urad and around 50,000 to 75,000 tons of moong beans to be imported primarily from Myanmar and African nations. Traders and Indian importers of pulses have welcomed the move; however, millers and farmers are surprised by the decision as it may suppress the prices. Analyze imports of pulses into India from complete India import statistics of pulses.

India imported pulses worth over 102 billion Indian rupees in financial year 2020, a rise from the previous financial year. This however, was the considerable drop in import value of pulses from fiscal year 2015 in the country. Now India has removed restrictions on importing moong, urad and tur pulses after a gap of 3 years.

As per India import data, India imported pulses the most in third quarter of 2020 during time period of Jan 2020 to Mar 2021. This is the time when India was registering a rise in number of coronavirus cases and demand of pulses increased due to several food schemes for poor population of the country. Below given chart shows share in values of pulses which India imported from Q1 of 2020 to Q1 of 2021. 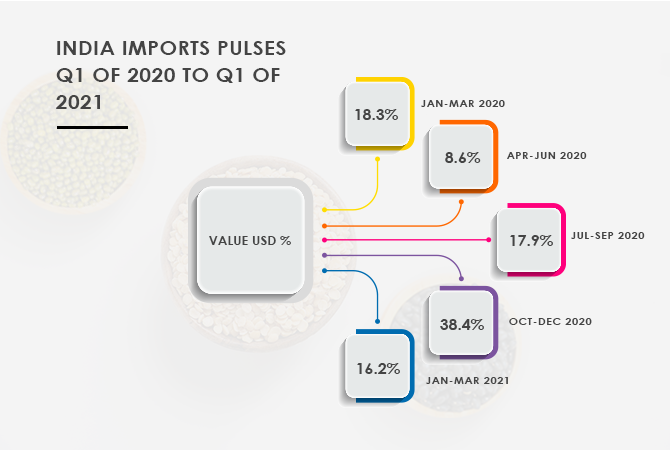 As per India shipment data of pulses, more than 50% of pulses were imported into India from Myanmar and Canada during Jan 2020 and Mar 2021. Mozambique and Tanzania stood at 3rd and 4th position with 13% and 11% share in value respectively. India trade data shows India’s top 10 import partners of pulses accounted for 94.5% to overall value of shipments in given period. Take a look at chart given to analyze percentage share of India’s top 10 import partners of pulses reported from Q1 of 2020 to Q1 of 2021. 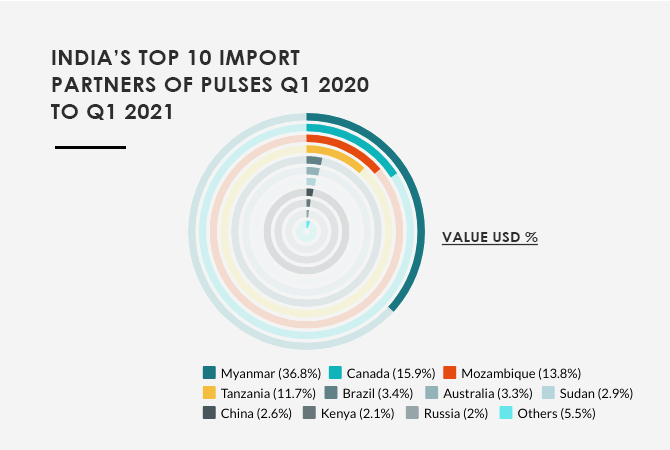