India imports from China decline to USD 68,163 million in 2019 from USD 73,845 million in 2018. As per latest India China trade statistics 2019 available with Export Genius, since 2010, the value of total shipments entered into India from China has been increased, except in 2019, with highest value recorded in 2018. It is predicted that that dollar amount is most likely to fall further in 2020 due to Covid-19 lockdown and trade restrictions. In speech, India’s Prime Minister Narendra Modi has said that India should more concentrate more on production of goods. Let’s have a bigger picture on Modi’s self-reliant Indian mission, import of goods to India from China in last years with India China trade data.

Prime Minister Narendra Modi on 12th May 2020 brought up the importance of local manufacturing and consumption of locally produced goods, stating that Indian needed to become “vocal for local”. Here is the list of sectors heavily depends on imports right now and cannot immediately scale up production domestically. Also, sectors partially depend on imports to make finished products and sectors that are already self-reliant and have minimal dependence.

Sectors Highly Depend on Imports

Electrical equipment such as smartphones and computers are a key part of India’s import bill. Primary and critical components such as printed circuit boards (PCBs) are used in making electronics. According to the Confederation of Indian Industry, around 88% of the components used by the mobile handsets industry are imported from countries like China.

More than 60% of the country’s medical devices are imported from China as well. India’s solar power industry is also highly dependent China to import cells and modules.

Sectors Partially Depend on Imports

India’s pharmaceutical industry is capable of making finished formulations, and also has domestic manufacturers of several key ingredients used to make them. However, the industry also imports some key ingredients, including fermentation-based ingredients for antibiotics and vitamins currently not manufactured in India. Medical devices like ventilators also rely on imports of several crucial components like solenoid valves and pressure sensors.

Even auto manufacturers in India depend on imports for various components to make electric vehicles. For instance, they import chemicals from China which are used to make cathodes and battery cells.

According to CII, local dyestuff units in India are also heavily dependent on imports of several raw materials, while speciality chemicals for textiles like denim are also imported. For instance, when China lockdown Wuhan earlier this year during Covid-19 pandemic; nearly 20% of India’s dyes and dyestuff production was hit due to a disruption in supply of raw materials.

According to India import data, India is now not as dependent on imports for some textile components like yarn as the production is going up. In technology and medical industry, India has the capacity to domestically make products like hot water bottles, hypodermic needles, wheelchairs, mercury thermometers and patient monitoring display units.

According to India China import export data, total value of China export to India has recorded a sharp rise from 2010 to 2018. The year 2019 recorded a decline in the value of total import from China to India. Below chart and table shows the dollar amount of goods imported by India from China registered in the last ten years. 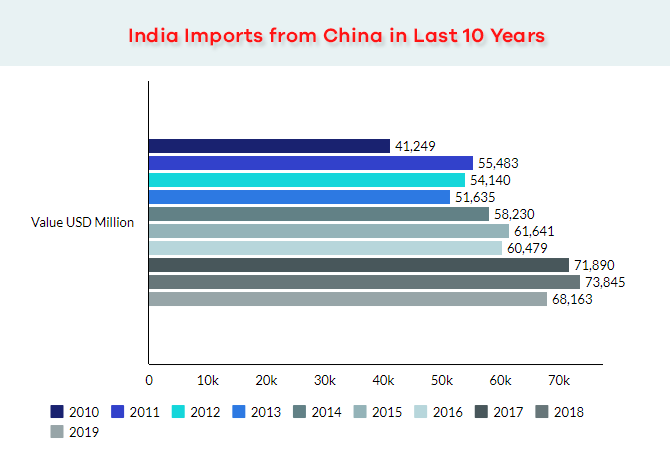 What does India import from China? At 2-digit level HS Code, India purchased mineral fuels, pearls & precious stones, electronics and machinery the most from China in 2019.  India’s top 10 imports from China accounted for 79.41% of the overall value of shipments entered into India from China. Here is a list of goods imported from China to India during 2019. 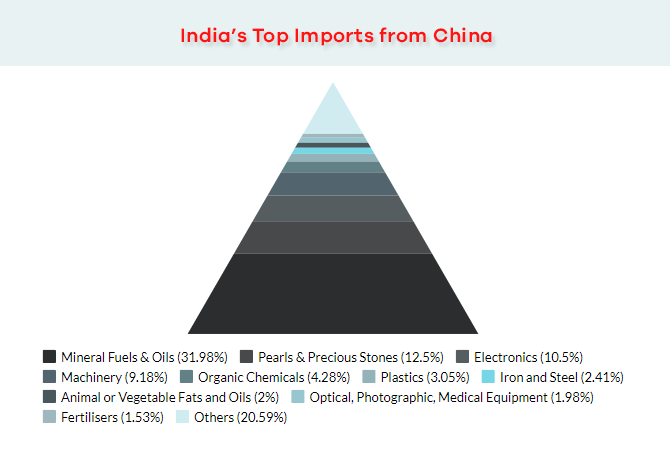 What India imports from China? At 8-digit level HS Code, India imports telephone sets, mobile phone components and other electronic items the most from China. Check list of products imported in India from China during 2019. 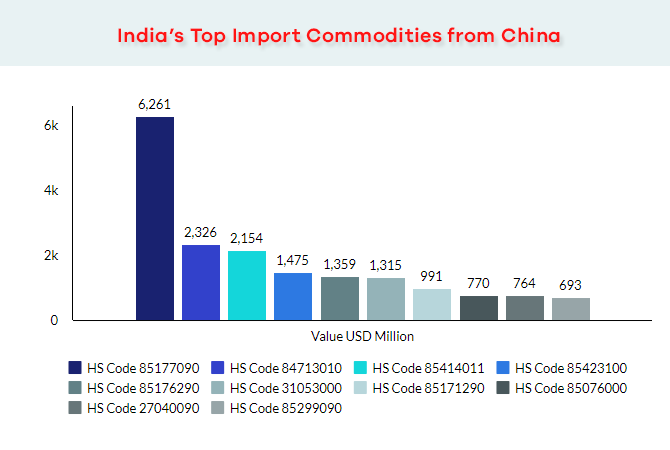 According to media reports, India and China are expected to discuss on steps to explore measures for boosting their bilateral trade, which has been significantly impacted by the coronavirus outbreak. China India import export data shows that trade between the two countries in January and February 2020 was down 12.4% year-on-year. This was also the time when the novel coronavirus epidemic in China was peaking.

India has crossed China in Covid-19 cases, when India is all set to go for lockdown 4.0 from 18th May 2020. Now China has lifted the lockdown due to improved situation, but India is extended it due to increasing number of coronavirus cases. Definitely, India’s imports from China will be less in 2020 as compared to previous year. And Modi’s self-reliant mission to increase in production of goods which are highly purchased from China and other countries; would decline the value of total imports this year.