The government of India has allowed the exports of 13 pharma formulations, which come under pharma preparations and products (HS Code 3006) as per Harmonized System. These formulations include Vitamin B6, B12 and B1 under advance licenses issued on or before 3rd March 2020. According to Export Genius market research report, India shipped pharma formulations worth US$ 210.0 million in 2018, a marginal rise from the previous year. Besides this, the government has also permitted exports of restricted 13 active pharmaceutical ingredients (API) and 13 formulations, which are allowed from units in special economic zones (SEZ).

On 3rd March 2020, the Directorate General of Foreign Trade (DGFT), had restricted the exports of 26 active pharmaceutical ingredients (API) and formulations to ensure there is no shortage of drugs in India due to lockdown in China’s Hubei’s province, a major source for these raw materials that has also been the epicenter of the coronavirus outbreak.

DGFT has addressed the issues faced by pharma exporters and fulfilled their export obligations under Advance Authorization scheme. As per circular issued by the department, no enhancement of quantity shall be permitted for import and export goods in the advance licensing scheme. However, paracetamol, Vitamin B6, B12 and B1 continue to remain restricted.

As per India export data, India’s exports of pharma preparations totaled US$ 210.0 million in 2018, down from 2017’s US$ 200.4 million. The year 2014 recorded the highest value of US$ 240.3 million, after which figures started declining. Below given chart and table shows pharma preparations export statistics recorded from 2014 to 2018. 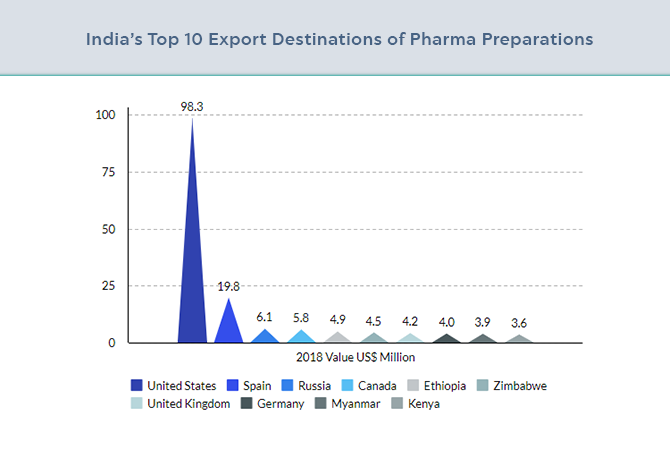 The government had restricted the exports of paracetamol and vitamins B1, B6 and B12, metronidazole, tinidazole, progesterone, acyclovir, erythromycin salts, chloramphenicol, clindamycin, neomycin and ornidazole amid the ongoing coronavirus pandemic.