Sugar is the generic name for sweet-tasting and soluble carbohydrates, which is used in food. It is acquired from various plants such as sugar cane and sugar beet. Brazil and India are the world’s largest producer countries of sugar. Brazil accounted for 42% and India 33% to world’s total sugar production in 2020. Other major sugar producers are the European Union (EU), China and Thailand.

According to Export Genius, Brazil has the highest export volume of sugar, which shared 21% to total sugar exports in the world during 2020. The second largest sugar exporter, India, had a share of 6.5% in the said year. India’s sugar industry is growing as India has exported 4.75 million tonnes of the sugar in the ongoing 2020-21 marketing year ending September, as against the 6 million tonnes quota assigned by the food ministry in January. The maximum sugar shipments were sent to Indonesia.

In Q1 2020-Q1 2021 period, India’s sugar exports saw the biggest jump in first quarter of 2021, when India exported sugar worth USD 1,332 million to the world countries. According to India export data, sugar exports from India went down considerably in last quarter of 2020. Below given chart shows dollar amount of India’s exports of sugar recorded in the given period. 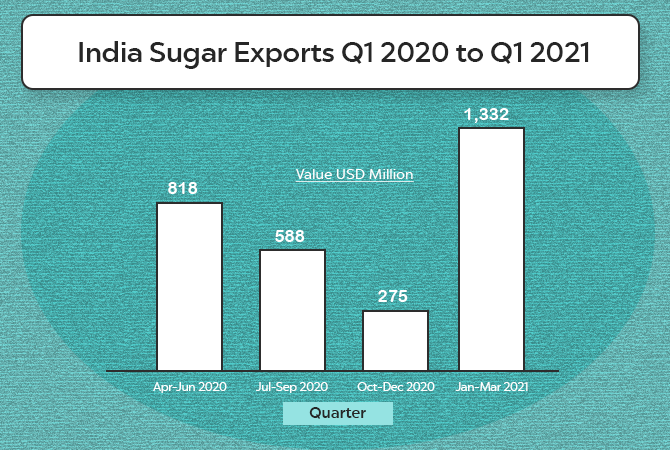 Indonesia is the largest sugar export destination of India, which shared 21.8% to overall value of sugar shipments in 2020. India export statistics of sugar show India’s top 10 export partners of sugar accounted for 76.2% to total sugar exports in the given year. Other major countries who import sugar from India are Iran, Sri Lanka, Sudan, Somalia, United Arab Emirates, Afghanistan, Bangladesh, Pakistan and China. Check value in percentile of these countries recorded in 2020. 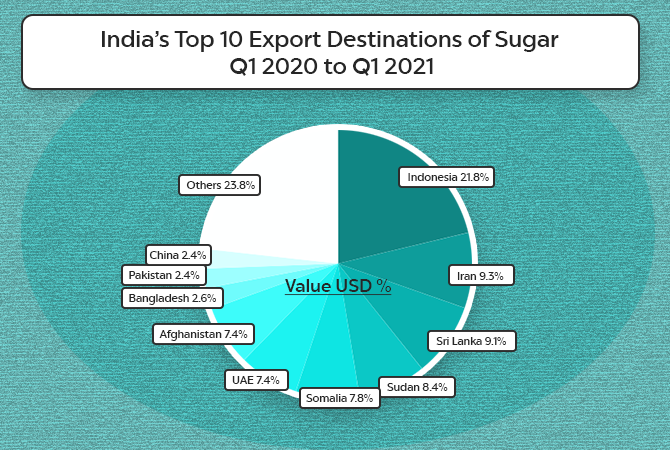 Prices of sugar in the international market have picked up on talks of declining production in Brazil, the world’s largest sugar supplier. This is likely to benefit sugar exports from India. Global sugar prices increased by 20% in April 2021. Now the National Federation of Cooperative Sugar Factories (NFCSF) has demanded an increase in export quota in view of the situation in the international sugar market.

Despite the second wave of coronavirus infections, international prices of sugar have seen steady gains, mainly on the backdrop of crude prices. Brazil, the world’s leading sugar producer, had diverted a substantial portion of its cane crop towards production of ethanol, prompting a downward revision in its sugar production. Increased demand of sugar from international markets has seen India’s sugar exports touch a new high. Indian sugar mills have signed contracts of 59 lakh tonnes, of which 43 lakh tonnes have already been shipped out of the country till May 2021.