The post-COVID scenarios have risen a demand in the agriculture sector and industrial groups for using electricity more efficiently. Since the economy’s rebound in the post-COVID 19, industries have ramped up their production and offices have reopened, resulting in energy demand. This was further heightened by the coal crisis in India, taken into account recently.

India coal imports have been significantly lower than the exports due to its reputation as the second-largest producer of coal and have the fourth-largest coal reserves in the world. Check out India statistics import-export 2021 below to see India’s coal trade with other countries. Get more information on India import-export of coal and other commodities from Export Genius.

Reasons For The Crisis

Rising global coal prices have played a major role in eliminating the practice for many domestic coal-based power plants to rely on domestic coal stocks, resulting in further scarcity of coal. According to the Chairperson of Coal India Limited (CIL), imported coal in the country power almost 10% of the total coal-based energy in India. Here are the countries from which coal is imported in India for the year 2020. Get more information on India’s coal imports and more.

Power consumption in August and September surged about 17% compared to the same period in 2019. CIL’s Chairperson also stated in an interview that due to demand for energy consumption post-pandemic, countries are finding difficulty in maintaining the demand-supply mismatch. He stated that about 2.7 GW of energy is produced, of which supplied coals account for around 18.5 lakh tonnes. Currently, 20 lakh tonnes of coal is supplied from CIL and others. He added that about 35%-37% of additional coal supplies were carried out to the power plants during August-September compared to the same period of 2019. In the ongoing month of October, the supply of coal reached a high rate of 45% compared to 2019’s October.

That being said, the aforementioned CIL official further mentioned that states are accountable for not maintaining a proper stock for the coal accordingly. CIL had 100 million tonnes of coal which were not lifted, and Indian states didn’t produce enough coal after a few requests of CIL. The official also stated that some states didn’t even clear the payment for the coal supplies.

Monsoon has been considered as the potential hindrance to poor production of coal in major coal-producing regions in the country such as Jharkhand, etc. CIL highlighted that this year, the rainy season extended beyond what was expected, making evaporation and production difficult.

Coal Exports And Need For Alternative

It is to be noted that India, being the second-largest coal producer in the world after China, also has the authority to export the largest and contribute to international coal demand as well. There has been no official news on India coal trade FTA 2021 but reports on the domestic power generation plants shunning the imports of coal due to high global coal prices.

Retrieved from our robust trade intelligence, here is India coal export data 2021 to countries with their respective trade values. As it can be seen in the India export data below, January recorded the highest share value of coal exports from countries, and afterwards, exports have constantly fallen till June. July recorded a sudden surge in coal exports from India in 2021, and begin to drop in August again. Access more of such import-export data from our online intelligence platform filled with the latest import and export data of more than 200 countries. 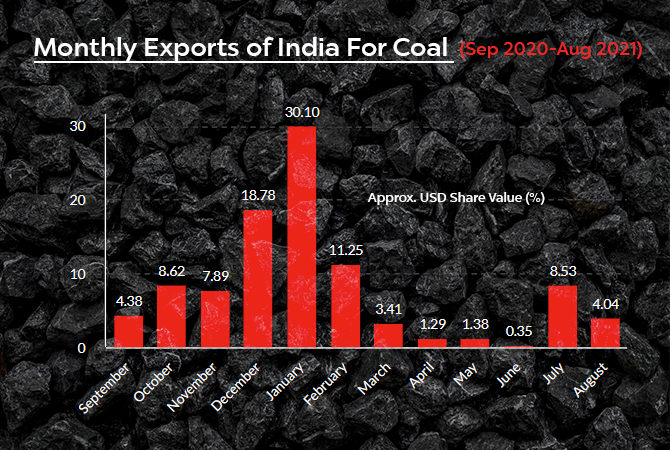 This has risen the need for India to develop alternative sources of energy in the country such as solar, hydro, geothermal and nuclear energy. The government of India in 2016 committed to cut carbon emissions by 2030 by 33% to meet the requirements of climate change. A mix of coal and clean sources of energy should be promoted by the government and should be further acknowledged and invested accordingly.

The world's greatest economies such as China has also started with initiatives to rely more on clean energy than coal. Imports of solar panels in China increased this year, according to our database of trade flows between countries. You can also access our wide collection of the countries’ import and export records along with information on importers and exporters from our online import-export intelligence platform. Contact us for more information and get a free trial.