India is a major producer and largest exporter of sugar in the world, after Brazil, while China is a major consumer and buyer of sugar. India’s exports of sugar valued at $661 million in 2017. And China imports of sugar valued at $1078 million in the said year. The largest buyer country of Indian sugar is Sudan with 23.8% share in value recorded this year. Brazil is top supplier of sugar to China with 34.3% share in value recorded in this year. Let’s analyse sugar market of India and China with latest development that China will now purchase Indian raw sugar.

On 1st June 2018, Indian Embassy in Beijing organized a seminar on promoting exports of Indian sugar to China. Around 25 Chinese companies representing major stakeholders in China’s sugar industry including prominent sugar refiners, importers and traders participated in this workshop. The China Sugar Association (CSA), China National Cereals, Oils and Foodstuffs Corporation (COFCO) and the China Council for the Promotion of International Trade (CCPIT) also participated in this seminar. With this, China is planning to open doors to Indian raw sugar.

India produced 20.3 million tonnes of sugar (HS Code 1701) in 2017, which is estimated to increase to 27.2 million tonnes in 2018. In order to stabilise domestic prices of sugar, the government has doubled import duty on sugar to 100%, while scrapping the export duty and also imposed stock limits on sugar mills for two months. India has 7 million tonnes of surplus sugar this year, which is expected to pile up further next year after India Metrological Department (IMD) forecast good rains.

The Indian Government has allowed companies to export 2 million tonnes of sugar until the end of 2018, under the Minimum Indicative Export Quota (MIEQ) scheme. This is to clear surplus stocks of sugar and improve cash flow to millers for making payment to sugarcane farmers. In a separate notification by the Directorate General of Foreign Trade (DGFT), the government has also allowed export of white sugar till September 2018 under the Duty Free Import Authorization (DFIA) scheme. According to Export Genius sugar export data from India, sugar exporting companies in India owe INR 13,899 crore to sugarcane growers as on 21st March 2018. 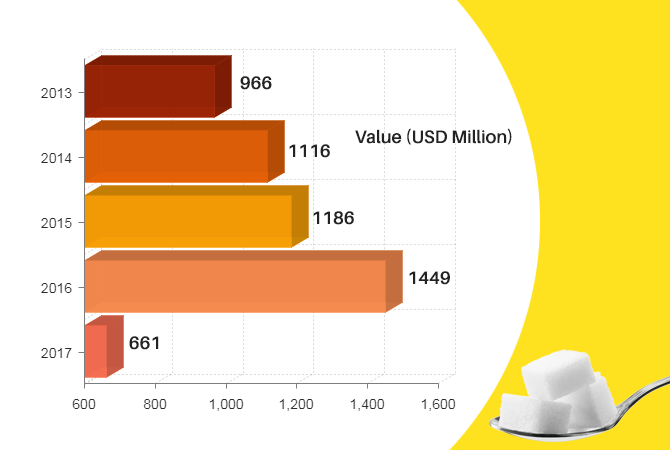 After almost a decade, India will export 1-1.5 million tonnes of raw sugar to China, though sugar exports attract 80% duty in Beijing. However, formal notification from China green lighting the consignment is yet to come. Raw sugar is the second product after Basmati rice that China has decided to purchase from India. This comes after Prime Minister Narendra Modi’s visit to China in a move to reduce the $60 billion trade deficit with India. The country exported total goods to China in 2017, which amounted to $13.3 billion, while imports valued at $76.2 billion.

The Indian Sugar Mills Association is hopeful that China will announce its new policy on sugar imports from India this month. An official from the association has said that with import from some developing countries including India to be exempted from the safeguard tariff, Indian exporters of sugar would only have to pay 50% export duty. Even with this tariff, sugar exports will get cheaper as sugar price in China is around INR 90-100 per kg, while in India, it is INR 29-35 per kg. Mills in Maharashtra is likely to get an advantage of sugar exporting to China.

Sugar Exports from India to China in Last 5 Years

Since 2013, India has been having low export trade of sugar with China. China sugar imports from India valued at $9260000 in 2017. But now, both the countries are planning to boost their trade in the sugar industry. China has agreed to start importing raw sugar from India with official agreement is still to arrive from China. Meanwhile, let’s have a look at sugar exports from India to China with statistics recorded in the last 5 years. 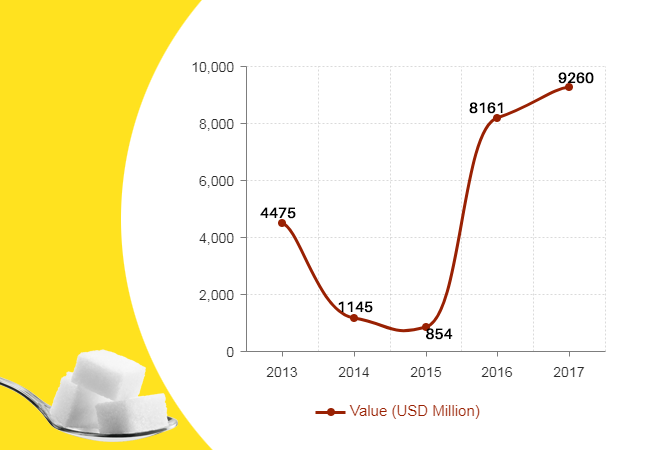 With surplus stocks of sugar, India is now looking ahead to export the product to China. Beijing imports about 4.5 million tonnes of surplus sugar stocks from Brazil, Thailand and Cuba. This is the first time that India is making a strong bid to export sugar to China as Beijing is not in the list of India’s top 10 importer countries of sugar. Besides Sri Lanka and East Africa, India is making a strong pitch for export of sugar to China and Bangladesh in order to cut losses due to surplus sugar stocks. 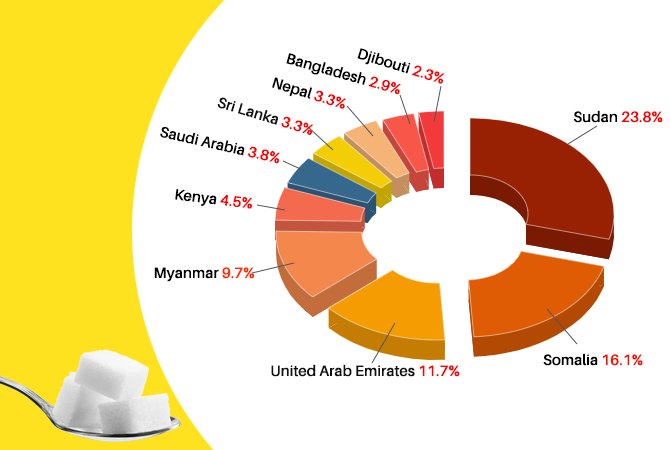 Among top sugar exporting countries in the world, India is the largest, after Brazil. China majorly purchases sugar from Brazil, but it is now planning to import raw sugar in large quantity from India as well. So, we have wait and watch that how trade of sugar between the two countries will boost their bilateral trade.