In an apparent bid to cool rising domestic prices, India, the world’s second-largest producer of wheat, has temporarily banned exports of wheat with immediate effect. The country recorded a decadal high in wheat prices in April and the inflation rate jumped to 7.79% in April 2022. According to the reports, India exported US$1,385 million worth of wheat from January to April 2022. In 2021, India’s exports of wheat totaled US$1554.4 million. Here’s an overall picture of India’s export market of wheat with the value recorded in 2022, 2021, and past years, and information on destination countries.

India’s ban on wheat exports came after a huge crop loss due to a heatwave in March this year. The government is also under pressure to rein in inflation that surged to 7.79% in April 2022. Also, the move is a U-turn two days after the government announced its plans for a big export push. Before the ban, the Central government decided to send trade delegations to Morocco, Tunisia, Indonesia, the Philippines, Thailand, Vietnam, Turkey, Algeria, and Lebanon for exploring possibilities of boosting wheat exports from India. In fact, India has set a target of a record 10 million tonnes of wheat in 2022-23 amid rising global demand for grain globally.

The government decision came as the Russia-Ukraine war which began in February entered the 12th week and the supply from the Black Sea has been restricted for nations amid the conflict. The United Nations has been repeatedly raising concerns over an imminent food shortage. Wheat prices surged to a new record high in European trading to 438.25 euros ($456.68) per tonne. It is expected that the wheat shortage may get worsen this year and prices of wheat in the global market would remain at the higher levels.

India has reported a good increase in the value of wheat exports in April 2022, as compared to the previous months. That could be a reason for the rising prices of wheat and a record high in inflation in April. India shipped US$1,385 million worth of wheat from January to April 2022. 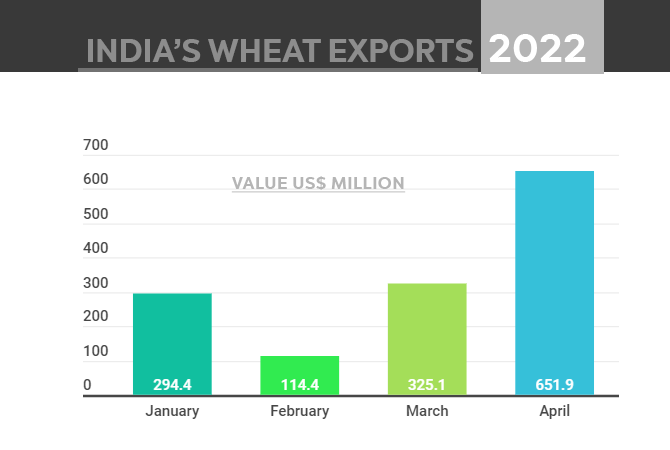 In 2021, India’s wheat exports totaled US$1,554.4 million. Quarter-wise, the highest number of wheat shipments departed from India in the fourth quarter. Below given chart shows the dollar amount of wheat exports from India reported quarterly in 2021. 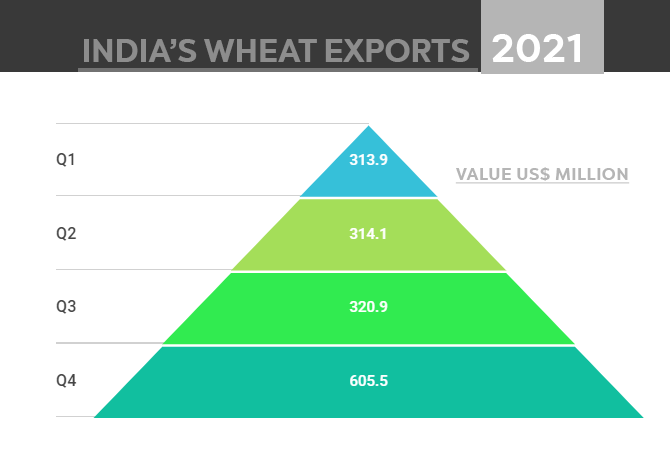 If we see trends of the last ten years, we found that India exported US$1,349 million worth of wheat in 2012, and that dollar amount started declining considerably and reached US$243 million in 2020. India’s exports of wheat increased sharply in 2021 and jumped to US$1554.4 million. 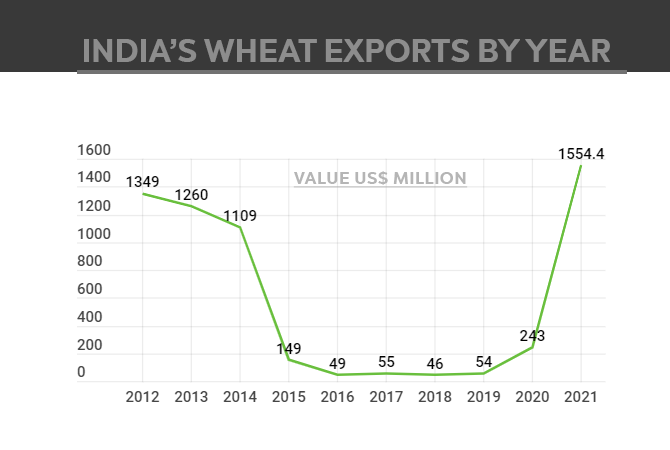 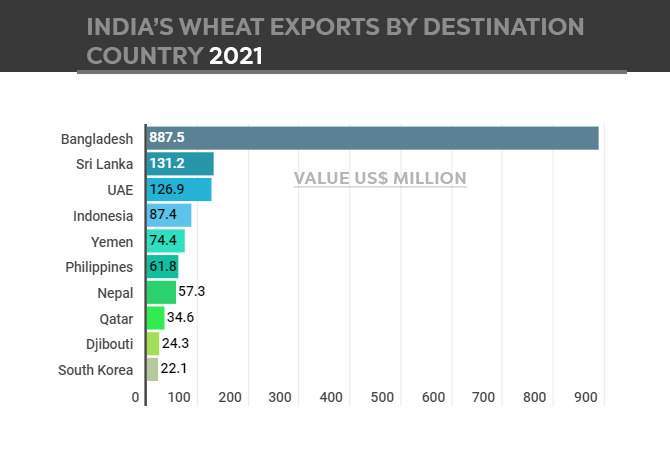 After five consecutive years of record harvests, India cut its wheat output forecast to 105 million tonnes from a February estimate of 111.3 tonnes after the heatwave hit crop yields. Banning wheat export is the first move to cool the rising domestic prices of wheat. India should take more measures to reduce the prices and control the increasing inflation as well.