India-Africa bilateral trade carries a variety of export opportunities for both the countries. India’s partnership with Africa based on a consultative model of cooperation, participative, non-prescriptive and responsive to the requirements of the African countries, witnessed a rise in bilateral trade of nearly 22% from the last year. India-Africa trade has touched US$ 62.66 billion for 2017-18. India’s exports to Africa amounted to US$ 26 billion in 2018, which saw a drastic decline from the last five years. Through this article, learn India’s exports to African countries statistics on top trading commodities and partners with special focus on India Africa trade 2018.

Since 2015, India’s exports to Africa have been on the decline, with slight improvement in 2017, India export data reveals. From 2014, the value of total export commodities from India to Africa declined till 2016. According to the International Monetary Fund or IMF, the value of commodities exported by India to the African countries almost doubles in the past five years. Have a look at chart and table below. 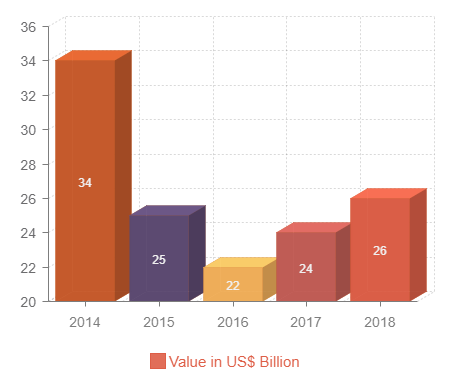 India’s main export commodity to Africa is mineral fuel & oil. According to India export statistics, the country supplied mineral fuel & oil worth US$ 4489 million to African countries in 2018. Vehicles, pharmaceutical products, machinery and cereals are other export products of India to Africa.

As per media reports, the Duty Free Tariff Preference (DFTP) Scheme announced by the government for Least Developed Countries (LDCs) has benefited African countries and contributed towards steady rise in the trade figures by extending duty-free access to 98.2% of India’s total tariff lines. So far, 38 African countries are enjoying the benefits of the DFTP Scheme. Here is the list of products exported from India to South Africa and other African nations. 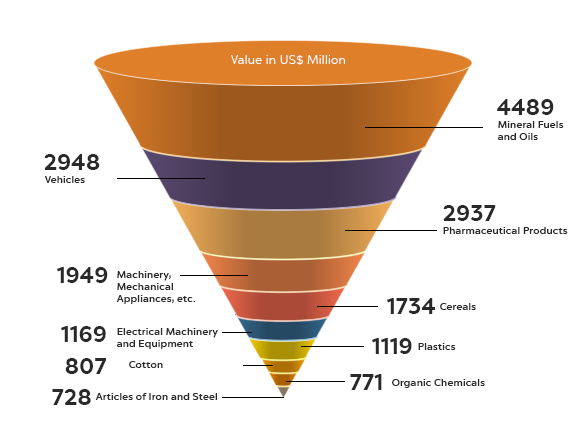 As per export data of India, the value of export to South Africa from India recorded the highest value, followed by Egypt, Nigeria, Kenya and Tanzania. Our market research report shows that India supplied goods worth US$ 4013 million to South Africa in 2018. Below given chart and table shows India’s top 10 African export destinations with special focus on India exports to Kenya and Tanzania. 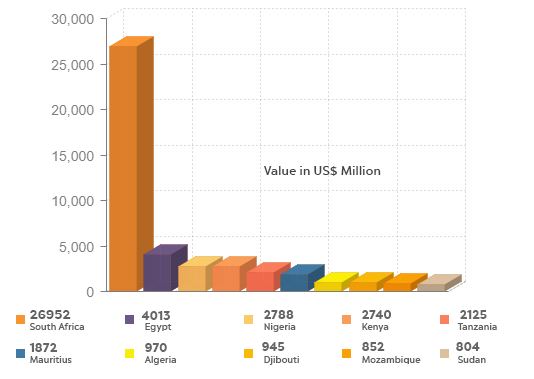 As the economy of Africa is growing slowly, India is taking advantage of it and supplying more and more goods to the region. In order to boost bilateral trade relations between both the countries, Indian government launched the “Focus: Africa” programme which boosted the trading market. Initially, the programme included countries like Ethiopia, Kenya & Mauritius but in time it was expanded to many other African countries.

Since Africa is the second largest continent with high population, the demand of goods is always high on the local market. Most of the African economy relies on imports and exports of different commodities to satisfy the needs of large population.