Import of Beer in India - Beer Market in India 2017

Beer is considered as most widely consumed alcoholic drink in the world and 3rd largest beverage, after tea & water. In India, both national brands like Kingfisher and international brands like Corona of beer are quite popular in India. Besides whisky and wine, the country also imports beer to meet the consumption. As per latest market research reports, import of beer in India is third largest among all alcoholic drinks. This whole article reflects on beer market in India 2017 and analyses import statistics of beer recorded in Q2 of the year.

Among all alcoholic beverages imported into India during Q2 of 2017, beer registered 6.29% share in value. Month-wise import data of beer shows that India recorded a rise in beer imports in May and decline in June 2017. Let’s have a look on beer import statistics of India recorded in these three months. 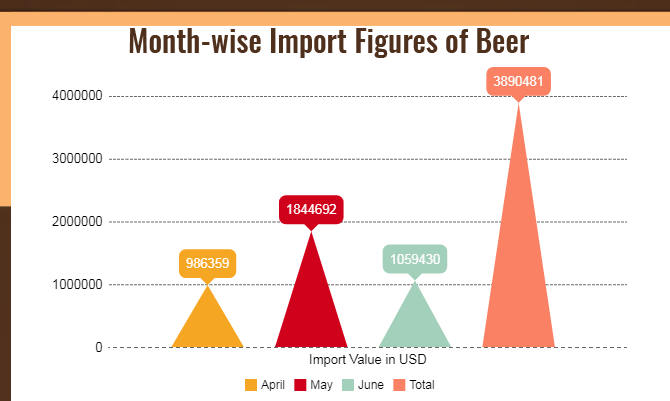 Corona Beer Brand is Maximum Imported in Q2 of 2017

The data on import of beer into India shows that Corona brand was imported the most during Apr-Jun 2017. It was followed by Hoeg Whit, Charger, Heineken and Hoegaarden. 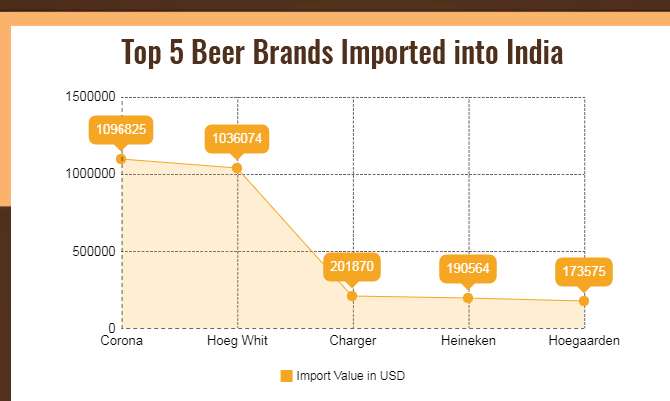 As per data on import beer into India recorded in Q2 of 2017, the country recorded maximum shipments of beer arrived from Belgium. In other words, Belgium stood as the largest exporter country of beer to India in the said period. It was followed by Mexico, United Kingdom, Netherlands and Germany. 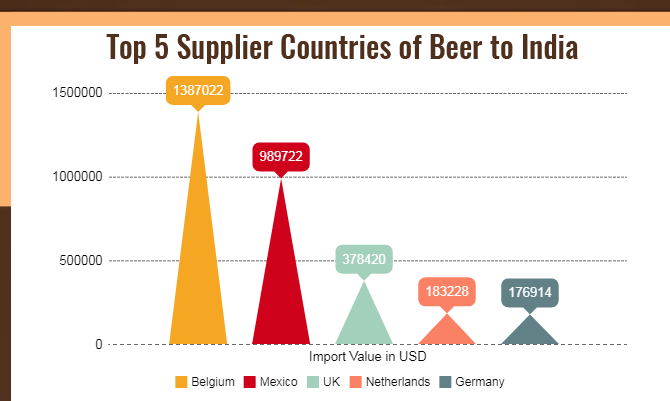 Tuglakabad ICD, which is located in New Delhi, received maximum number of beer shipments between April and June 2017. From 5.61% share in value of beer shipments recorded from all Indian ports, Tuglakabad ICD registered 3.09% share in value. This port was followed by Nhava Sheva, Gari Harsaru ICD, Chennai Sea and Delhi Air. The import values of all these ports are given below:

How to import beer in India? For this, beer import data of India is essential in which useful information like beer importers in India, foreign suppliers of beer, value, quantity, etc. is covered. Find India import samples of beer right @ http://www.exportgenius.in/import-data/india/beer.php.

We at Export Genius provide authentic information on beer market in India 2017 with actual shipment records of beer imports. So, subscribe our beer import customs data of India by filling up our enquiry form @ www.exportgenius.in.