Alcoholic beverage contains a substantial amount of ethanol. It is a depressant which in low doses causes euphoria, reduced anxiety, sociability and in higher doses causes drunkenness and unconsciousness. Alcoholic drinks are legal in most of the countries across the world and it also plays an important social role in many cultures. It is one of the most widely used recreational drugs in the world which classified into wines, beers and spirits.

In Q2 of 2017, India recorded value of USD 70714553 from alcohol imports. It is majorly importing beverages, spirits and vinegar from United Kingdom. The alcoholic beverages HS code is 22. As per the Alcohol import data, Whisky is the most imported alcoholic beverages in India. Let’s take a look at the detailed analysis on the basis of brand, type, exporters, importers and Indian port.

The GST council applied the second highest tax (18%) to ethanol and potable alcohol will continue to be exempted from GST structure as a state by state taxation issue. More than 1100 brands of alcoholic drinks have imported in India from April to June 2017. Johnnie Walker is the most imported alcoholic beverage in India. It registered USD 12889645 alcohol import value which represents 20.84% of total’s output.

Chivas Regal is the other most imported alcoholic drink brand in India. It represents 9.14% of imports during Q2 2017 i.e. USD 5650981. It is followed by Black Dog, Ricard and Glenlivet brands. Check the following table to know the top alcohol brands which are imported in India. 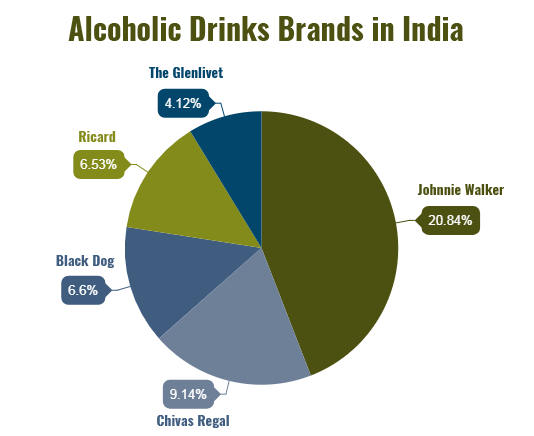 Whisky is the Most Imported Alcoholic Drink 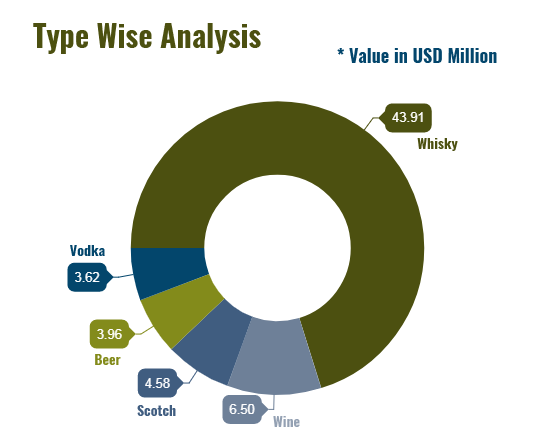 Around 300 brands of alcoholic drinks in India are importing from France. India registered import value of USD 5144638 which represents 8.32% of total imports. Moet & Chandon, Hennessy, Grey Goose, Glenmorangie brands are the most imported alcoholic drinks brands from France.

Unites States of America is the 3rd largest exporter of India and registered 4.18% imports from USA from April to June 2017. India has imported 70 different alcoholic brands from USA including Jack Daniels, Carlo Rossi, Jim Beam etc. Refer the below table to check the top alcoholic drinks exporting countries of India. 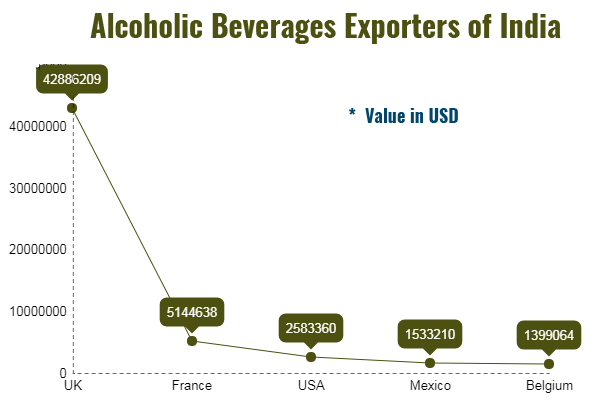 Nhava Sheva Sea (JNPT) is the biggest Indian Port for importing alcoholic drinks in India. In Q2 of 2017, India recorded 51.71% imports from this port i.e. USD 31975756. As per the alcoholic import data, India has imported around 500 brands during the same period from JNPT.

We have mentioned above the detailed analysis of alcoholic drinks report which is classified under brands, types, exporters, importers and Indian port. You will get the complete report and will get an idea about at what rates alcoholic drinks are importing in India, at what value companies are importing. With the help of these details, you will be able to track your competitor’s shipments. Let’s take a look at the highlights of this article and what you will gain from our report.

·         Most imported alcoholic drinks brands with the import value.

·         What are the biggest Indian Port for alcoholic beverages imports?