India, the world’s largest producer of Hydroxychloroquine (HCQ), exported USD 14455116.87 worth of drug during Jan-Dec 2019, Export Genius market research report reveals. As the world is combating against the deadly Coronavirus pandemic, the Indian government banned the exports of this crucial drug last month due to rising demand of HCQ in Indian market as the country is also affected by the virus. However, after U.S. President Donald Trump request of retaliation; the government of India decided to export HCQ to countries that are highly affected by the virus. Let’s get an overall picture of India exports Hydroxychloroquine.

Why Demand of Hydroxychloroquine is Rising in India?

Hydroxychloroquine & Chloroquine phosphate are in the same class of drugs. Chloroquine is an anti-malarial drug used to prevent & treat malaria, while HCQ is used to treat auto-immune disorders like lupus, rheumatoid arthritis & as third-type diabetes. According to some researchers, HCQ, along with a combination of a common antibiotic azithromycin, has a potential treatment for Covid-19. Therefore, India has recommended the use of HCQ to combat the virus.

·       India will supply drugs tested as coronavirus cure to nations that are badly affected.

·       Earlier U.S. President said “there may be retaliation” if India doesn’t agree to export HCQ.

·       SAARC nations among 30 countries asked India to lift the ban on the export of HCQ.

India’s Exports of Hydroxychloroquine in 2019

According to India export statistics of Hydroxychloroquine, the exports of HCQ from India valued USD 14455116.87 during Jan-Dec 2019. The country shipped HCQ mostly to the United States in the said period. As India and other countries are affected by the coronavirus, so the demand of this drug is on the rise globally.

As per DGFT notification dated 04th April 2020, India banned exports of Hydroxychloroquine. This ban has revoked on 07th April 2020 after the United States request to fight against the Covid-19.

As per India customs data, the highest shipments of Hydroxychloroquine worth USD 8149726 were departed from Gujarat state to the world in 2019. This state shared 56% value to total HCQ exports from India. And in Gujarat, Ahmedabad recorded the highest value of shipments totalled USD 7782670 and shared 53% value to total exports. 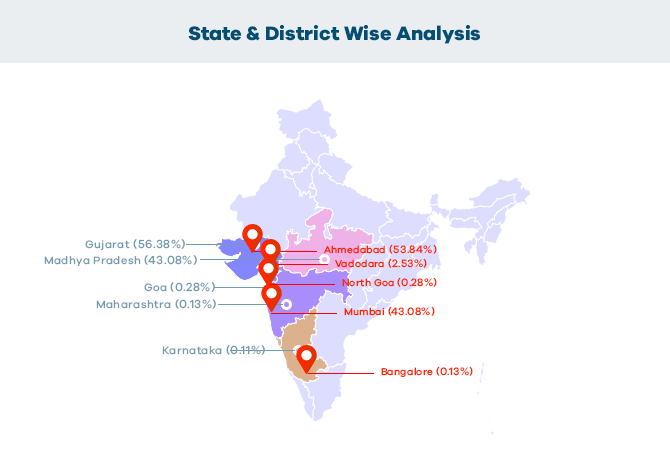 Among top 5 Indian exporters of Hydroxychloroquine, Cadila Healthcare Limited shipped HCQ the most to the world, which shared 53% of value to total exports in 2019. Have a look at percentage share of other HCQ export companies in India. 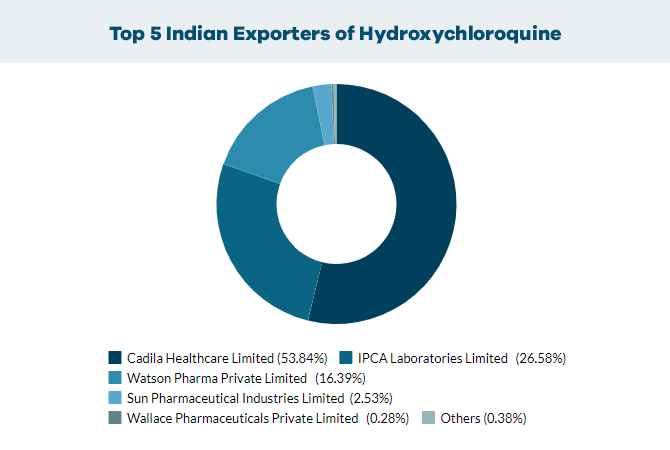 The highest value of HCQ shipments valued USD 4897134.27 departed from India recorded from Nhava Sheva Sea port, which shared 33% value to total exports. Here is the list of top ports from where shipments of Hydroxychloroquine were departed in 2019.

Also, check the list of major overseas importers Hydroxychloroquine who purchased from India in 2019.

We are the best provider of market research reports and statistics on import and export activities around the world. Get global trade data with accurate shipment details on any product, country or company. See sample of India exports Hydroxychloroquine below to know which columns are covered in data.

***Other hidden columns like Date, Indian Exporter Name, Foreign Importer Name and many more are also covered in data.

In this frightening situation when the world is fighting against the deadly Coronavirus, India has lift ban on exports of Hydroxychloroquine to countries which are badly affected by Covid-19. Till now, millions of people around the world have been infected by the virus and thousands have died.