Global wheat exports amounted to 178M tonnes in 2019, a rise of 3.9% as compared to the previous year’s figure. The total export volume increased at an average annual rate of +2.9% from 2009 to 2019. According to global trade data of wheat, total countries around the world supplied wheat worth USD 39.9 billion in 2019. Russia stood at top position in global wheat exports, followed by the United States, Canada, France and Ukraine. Although China and India are the largest wheat producers in the world, but they export less as compared to Russia in order to meet the domestic wheat consumption. Let’s have a larger view of global wheat exports from wheat trade statistics.

Wheat Exports from the World Countries

Global wheat exports valued USD 39.9 billion in 2019. Over the period under review, total wheat exports indicated a moderate expansion from 2009 to 2019. Its value rose at an average annual rate of +2.9% over the last decade. As per global trade statistics, world countries exported about 178M tonnes of wheat in 2019. 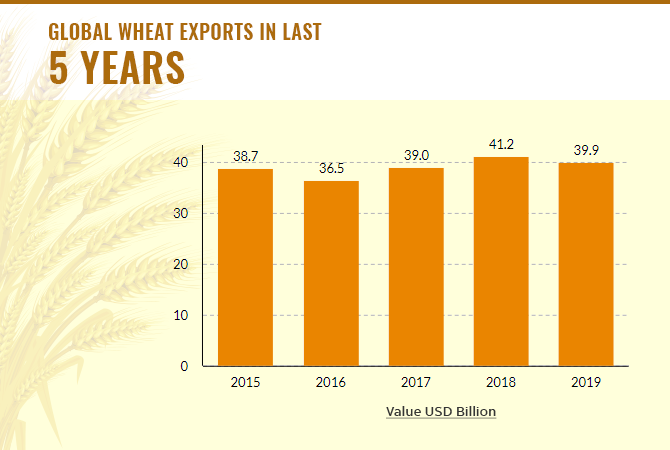 From 2009 to 2019, the most notable rate of growth in terms of shipments, amongst the leading exporting countries, was attained by Ukraine, while exports for the other global leaders experienced more modest pace of growth. In value terms, after Russia, the largest wheat supplying countries worldwide were the U.S. (USD 6.3 billion) and Canada (USD 5.4 billion). Russia, the U.S. and Canada recorded a combined share of 45% to global wheat exports in 2019. Below given chart and table shows wheat quantity of top 5 export countries recorded in 2019. 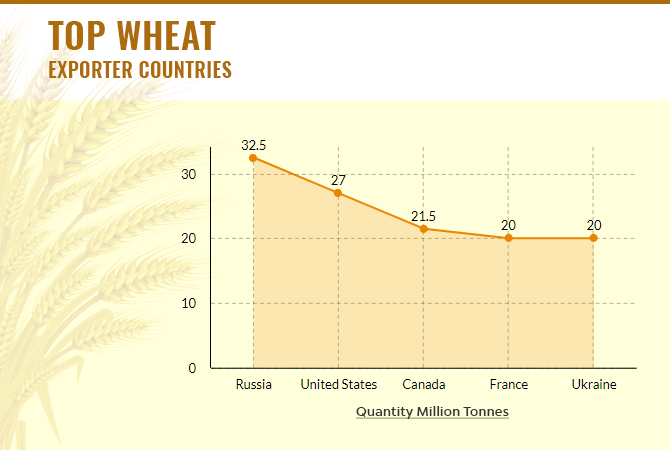 Checkout the list of Russian wheat exporters and find the real prospects for your business.

Click on Search Live Data and also find wheat exporters of other countries.

The countries with the highest volumes of wheat production in 2019 were China (134 M tonnes), India (102M tonnes) and Russia (75M tonnes), together accounting for 41% of global production.

In 2019, global wheat production amounted to 762.2M tonnes, growing by 3.9% compared with the previous year. The countries with the highest volumes of wheat production in 2019 were China (134M tonnes), India (102M tonnes) and Russia (75M tonnes), together accounting for 41% of global production.

Wheat is one of the basic cereal requirements for countries around the world. Russia is the top wheat exporter country, although China and India are the largest wheat producer globally. Always be up-to-date with latest global wheat export statistics right here.