The collapse of the Afghani government and the speed at which Taliban forces have taken over the country poses many questions, not least about the country’s economic future and role as a trade route. Global trade is expected to get impacted, particularly India’s trade with Afghanistan as Taliban has stopped movement of cargo through Pakistan. India has long-standing relations with Afghanistan, especially in trade and a large investment into the country. Let’s have an early assessment of global trade impact of Taliban takeover Afghanistan.

Who are the Taliban?

The Taliban emerged in the civil war that followed the withdrawal of Soviet troops in 1989, predominantly in the south-west and the Pakistan border areas. 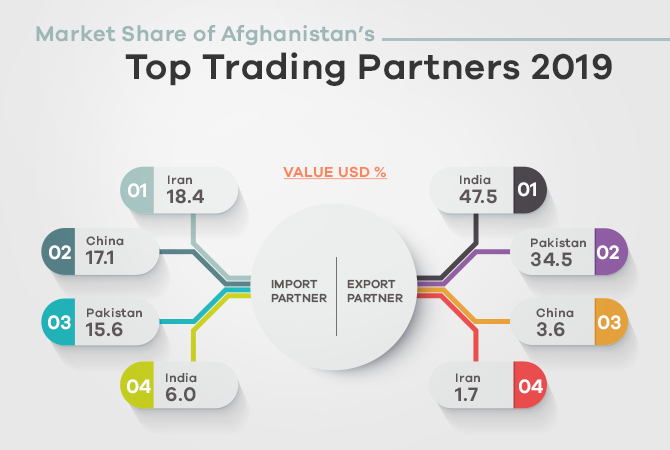 As the Taliban takeover control over Afghanistan after two decades, the trade between India and Afghanistan has been severely affected. According to the Federation of Indian Export Organization (FIEO), the Taliban has stopped the movement of cargo through routes of Pakistan thereby hampering and stopping exports & imports between the countries. India is one of the largest trading partners of Afghanistan. The latest India export data shows India shipped goods worth USD 538 million to Afghanistan during Jan-Jun 2021.

Prices of dry fruits in India are likely to rise after the Taliban stopped all import & export of goods with India as 64% of India’s dry fruits came from Afghanistan during Jan-Jun 2021. India imported Afghani dry fruits worth USD 5 million in first six months of 2021. Other major imports from Afghanistan include cherry, watermelon and medicinal herbs. Bilateral trade between India and Afghanistan stood at USD 1.4 billion in 2020-21 as against USD 1.52 billion in 2019-20.

The Afghan economy has been depending on international aid with a limited private sector. Trade experts predict the current situation in Afghanistan will affect international trade.

Afghanistan is at the centre of a number of trade routes linking Europe and countries in the Middle East and Far East including China’s Belt and Road Initiative (BRI). China is the second-largest import partner and third-largest export partner of Afghanistan. China’s major imports from Afghanistan are nuts, animal hair, dried fruits, vegetable products and tropical fruits.

China’s top exports to Afghanistan are rubber, broadcasting equipment and yarn woven fabric. Certainly, trade between China and Afghanistan will also be affected by the current situation into the country.

The Taliban controlling over Afghanistan could fuel a surge in the export of heroin and other drugs as it takes control of trade routes.

Landlocked Afghanistan is reliant on ports in other countries for exports and imports. India’s investment in Chabahar Port in Iran could be dead money from the effect of Taliban’s control over Afghanistan. Chabahar allow a route to Afghanistan that sidestepped Pakistan. However, the development has moved slowly and the United States has backed alternative connectivity projects with Pakistan and Uzbekistan. Pakistan is also developing its own Chinese-backed port at Gwadar, although progress has been troubled.

Afghanistan Trade with India, Iran, China and Pakistan – Past Scenario 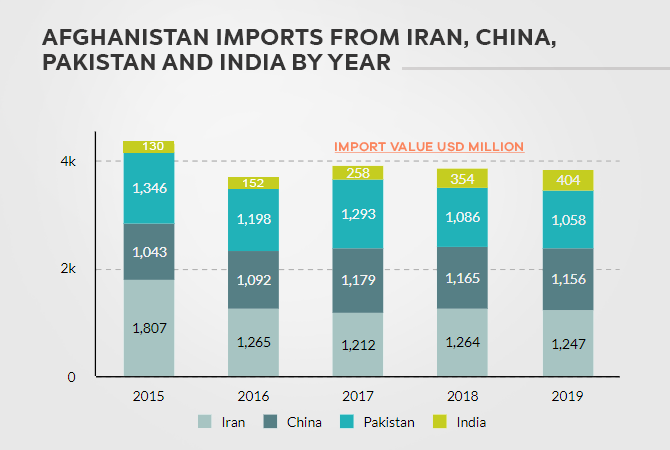 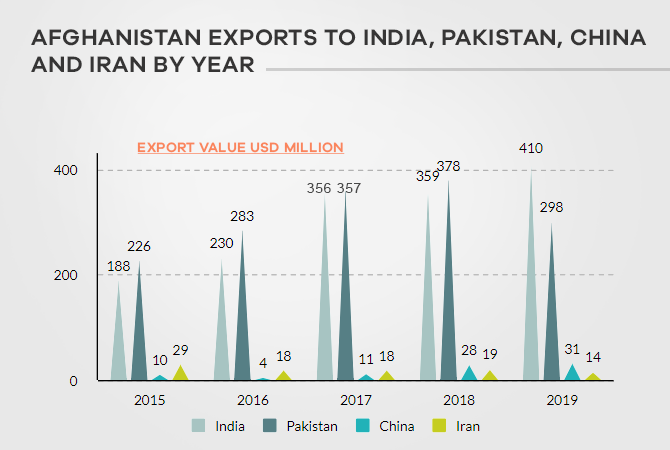 What could happen next?

How the Taliban plan to govern Afghanistan and trade with countries, particularly India remains unclear.

Get full Afghanistan import data and data of other countries that will be impacted majorly by Taliban takeover power in Afghanistan. Contact Us for any data requirement and our sales experts will reach you regarding any query.