The world’s total exports estimated USD 18.74 trillion in 2019. That dollar amount reflects a drop of about -3.7% from USD 19.45 trillion one year earlier during 2018. Based on Export Genius global trade data, China topped the charts as a leading exporter country in the world with 13.3% percentage share recorded in 2019.At 2-digit level HS Code, electrical machinery & equipment was the largest product category exported by the global countries. Have a look at more global trade statistics with list of world’s top 20 export countries.

As of June 2020, the earth’s population was roughly 7.8 billion. The USD 18.74 trillion value of world’s total exports in 2019 translates to approximately USD 2,400 for every person on the planet.

>>Search Live Data Of Any Country & On Any HS Code Or Product Description!

World’s top export countries are China, United States, Germany, Netherlands, Japan, France, South Korea, Hong Kong, Italy and Mexico. According to international trade data, China exported goods worth USD 2.4 trillion in 2019, followed by the United States with USD 1.6 trillion worth of commodities. China and the United States together accounted for 22% of overall value of shipments departed from the countries around the globe. Below are the world’s top export countries that exported the highest dollar value in exports during 2019. 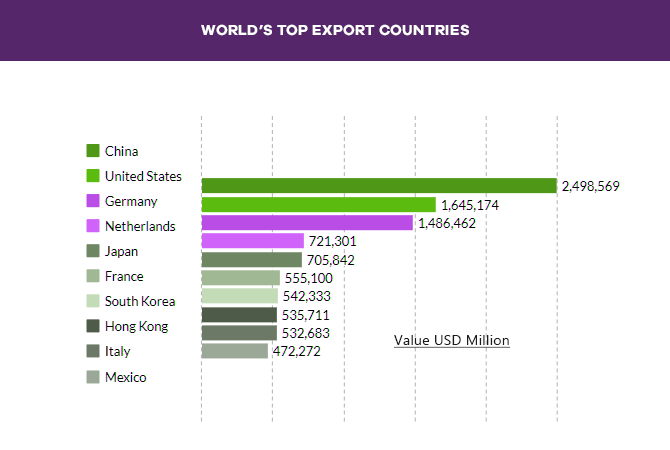 By value, the top 20 exporting countries accounted for about 72% of total exported commodities during 2019. Among them, Vietnam, Mexico, Switzerland and China were the four largest exporters who recorded a rise in the value of exports in the said year. An increase in percentage share of these countries were – Vietnam (up 24.9%), Mexico (up 4.7%), Switzerland (up 1.1%) and China (up 0.2%).

In 2020, picture of global exports may change drastically due to ongoing fight against the coronavirus pandemic. Millions across the world are affected by the deadly Covid-19, which has taken thousands of lives and impacted the global economy as well. International trade has been much slower and in fact it was halted from Jan to Apr 2020, when major countries went under complete lockdown in a phased manner. Now we have to wait and watch till the end of year to ascertain real impact of this virus on global trade.