Global potato exports amounted to USD 3.8 billion in 2019. The amount of potatoes produced worldwide reached 371M tonnes in the said year, a surge of 2.1% as compared to the previous year. The latest potato export data available with Export Genius shows that France exported potatoes worth USD 693 million the most last year. Check the best global export statistics of potato and analyze market intelligence information on world’s top export countries of potato.

In 2019, potato export shipments rose by 4.9% to 15M tonnes rising for the fourth consecutive year after two years of decline. As per global customs data, the total export volume increased at an average annual rate of +3.2% from 2007 to 2019, however, the trend pattern indicated some noticeable fluctuations being recorded in certain years.

The most prominent rate of growth was recorded in 2013 when exports rose by 42% against the previous year. As a result, exports of potato peaked to 16M tonnes. From 2014 to 2019, the growth of global exports of potatoes remained at a lower figure. Below given chart and table shows dollar amount of potato exports in the world recorded from 2015 to 2019. 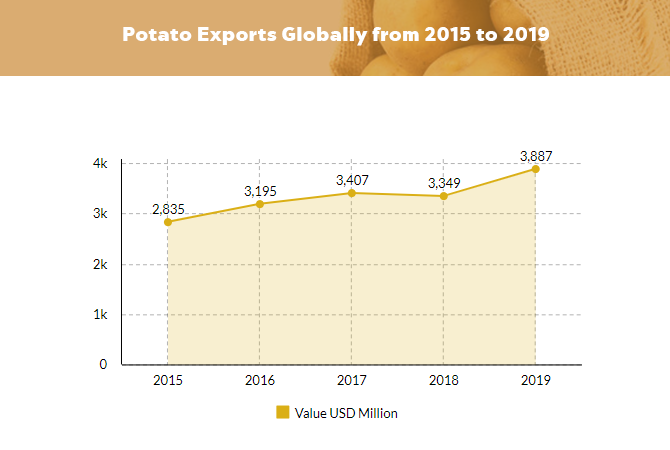 Potato export data 2019 shows that France shipped the highest number of potato shipments. It was followed by Germany, Netherlands, Belgium and Egypt. These top exporters of potatoes, together committing 60% of total exports. Other major export countries of potatoes were Pakistan, the United States, Canada, China, India, Spain and Saudi Arabia. Below given chart and table shows dollar amount and quantity of potatoes exported by countries in the world during 2019. 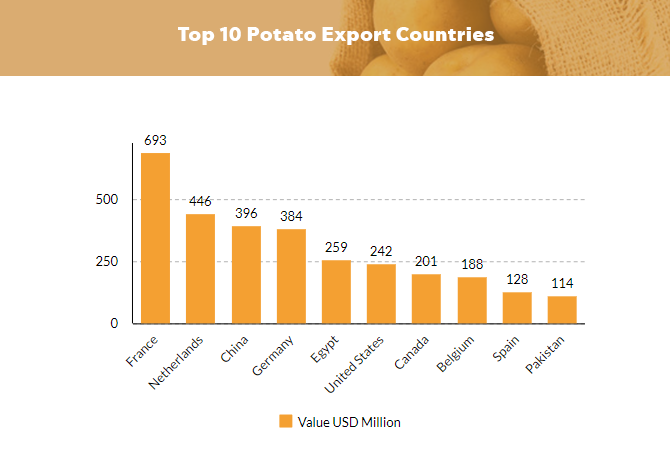 Potato Production in the World

The countries with the highest volumes of potato production in 2019 were:

These top 3 potato producing countries in the world recorded a combined potato production share of 45%. These countries were followed by Russia, the United States, Bangladesh, Germany, France, Poland, the Netherlands, Canada and Belarus.

From 2007 to 2019, the most notable rate of growth in terms of potato production, amongst the key producing countries, was accomplished by Bangladesh, while potato production for the other global leaders experienced more modest paces of growth.

The countries with the highest volumes of potato consumption in 2019 were:

China, India and Ukraine together shared 45% to total potato consumption in the world. These countries were followed by Russia, the United States, Bangladesh, Germany, Poland, the Netherlands, Canada and Belarus, which together accounted for a further 23%.

Potato is one of the basic edible vegetables, which is produced and consumed in almost all major countries in the world. China and India are the top producers and consumers of potatoes. In terms of exports, France and Netherlands are the largest export countries of potatoes. Get global export data of potatoes with actual shipment details right here.