The biodiesel fuel market is an alternative to the traditional fossil fuel that takes millions of years to form. Biodiesel fuel is a renewable form of fuel, which is biodegradable and is formed in a short period of time from organic materials such as cooking & vegetable oils, animal fats & waste, and microorganisms.

The market for biodiesel fuel grew in the year 2021 in terms of import and export values, as compared to the trade values of the year 2020. Take a look at the trade statistics of biodiesel fuel with top importing and exporting countries with a year-on-year comparison to draw out conclusions and possible projections about the future of this market. 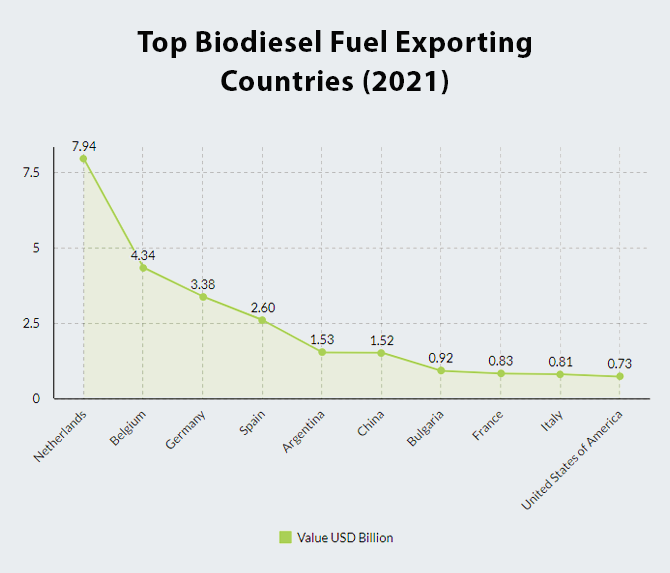 The countries listed below in the table are the top countries associated with the top import and export countries found in datasets shown above. The values between these datasets gave the conclusion that the Netherlands and Belgium both are top importing and exporting countries.

The below table shows the top 5 countries from which Belgium has imported biodiesel fuel the most for the year 2021. The Netherlands is at the top with a share value of 60.1%, followed by Germany with 17%, France with 8.3%, Spain with 3.6%, and China with 1.5% share value. 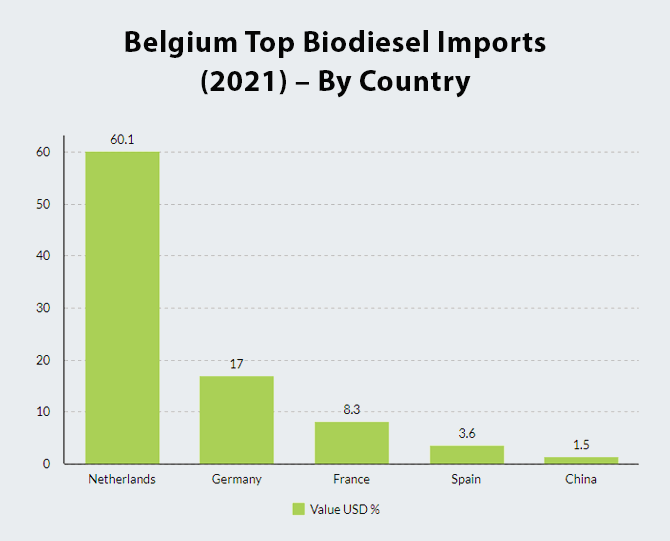 The below table shows the top 5 countries to which the Netherlands has exported the most biodiesel fuel in 2021. Belgium is at the top with a share value of 34.7%, followed by Germany with 24%, France with 9.5%, Bulgaria with 5.6%, and Spain with a 4.7% export share value. 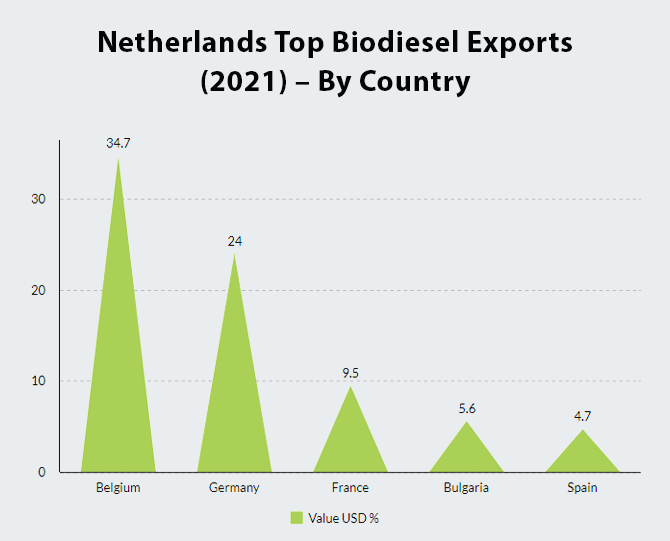 The Future Of Biodiesel Fuel And Projections

In recent years, many countries have leaned towards this cleaner, more renewable form of fuel. Governments from different countries are taking steps and initiatives to widespread the use of renewable fuel that also helps in reducing carcinogenic emissions by up to 85%.

In Spain, substantial energy firms such as XFuel secured about 8.2 million euros worth of funding to manufacture the next generation of synthetic diesel, marine, and jet fuel technology, with resources to produce high-grade fuels at even a lower cost than fossil fuels in the market.

In Argentina, the government has increased the mandate of biodiesel blend content to 7.5% for 60 days, both for small and medium enterprises. The decision from the Argentine government comes after a fuel shortage crisis.

In Indonesia, the government of Indonesia has planned to increase the content of palm-oil-based fuel in its B35 biodiesel, by about a percentage of 35%, starting officially from June 20, 2022.

The global market for biodiesel fuel is estimated to stand at a full-fledged market value of about $59 billion by the end of 2032, with an estimated compound annual growth rate of 3.6%. But whether the import and export of biodiesel fuel grew, the question still remains.

To draw conclusions about the growth of biodiesel fuel trade, there are two tables with different datasets – one of biodiesel fuel exports by the Netherlands and the other one being biodiesel fuel imports by Belgium. The trade values for the first quarter of 2021 and 2022 are shown. 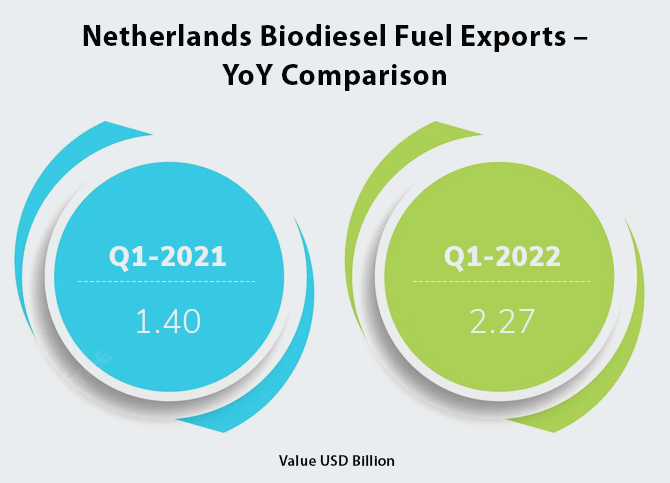 Biodiesel fuel trade in 2022 has increased, as seen in both the datasets seen above. This shows promising growth for the commodity in upcoming years. Biodiesel fuel is an alternative to traditional fossil fuel usage that requires less time and price points.

The trade between countries for such cleaner alternatives is expected to grow over the next coming years as demand for substitute fuels grows more and brings a new kick start to sustainable development.