Germany has recorded its first monthly trade deficit of US$1 billion in May 2022 in 30 years amid soaring inflation and supply chain disruption weighing on the country’s industrial base. According to our database, Germany’s exports stood at US$129.5 billion while its imports were at US$130.5 billion in May 2022. The trade between Germany and Russia was also hit as German exports to Russia declined in April. Here’s a complete picture of Germany’s trade with the world in 2022.

This is the first time in 30 years that Germany has recorded a monthly trade deficit of 1 billion in May 2022. The country’s imports were higher than its exports in the said month. From the beginning of the Russia-Ukraine war in Feb, the supply chain has been disrupted leading to rising prices of commodities. Here’s a chart showing Germany’s imports and exports reported from Jan to May 2022. 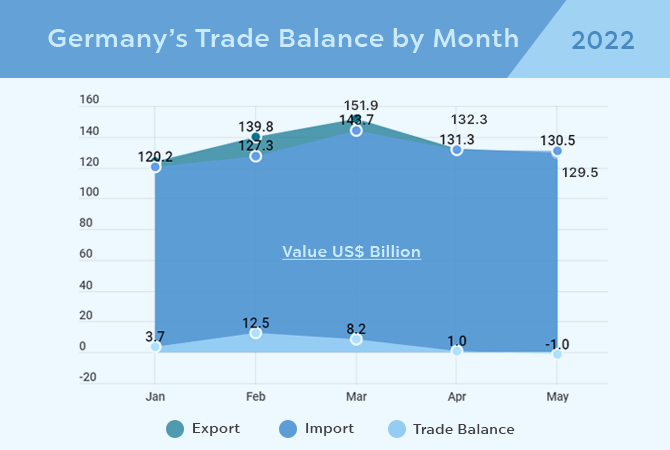 Germany’s Trade with Russia Declined After the Invasion of Ukraine

Germany’s exports to Russia declined by almost 60% in March 2022 after the invasion of Ukraine and fell again in April. Germany’s imports from Russia also decreased in April 2022. Here is a picture of how much Germany traded with Russia in the first four months of 2022. 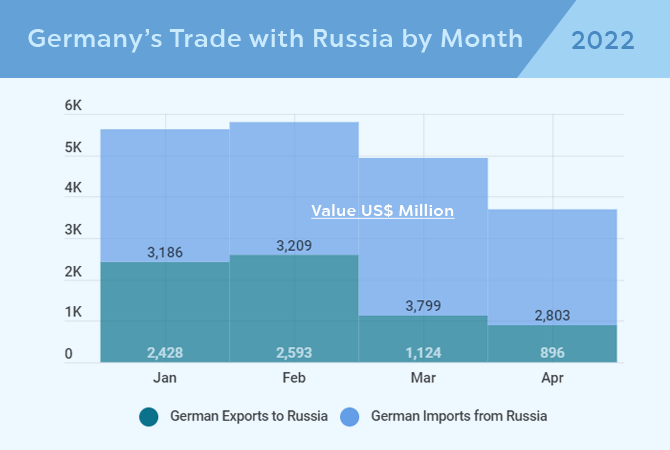 Germany exported medicaments for therapeutic or prophylactic purposes the most in April 2022, followed by motor cars & vehicles transporting less than 10 persons. Other major exports of Germany were immunological products, electrical energy, gearboxes, airplanes, natural gas in the gaseous state, articles of plastics, vaccines against Sars-related coronaviruses for human medicine, and parts for assembling bodies of tractors. Here’s a data visualization of these commodities reported from Jan to Apr 2022. 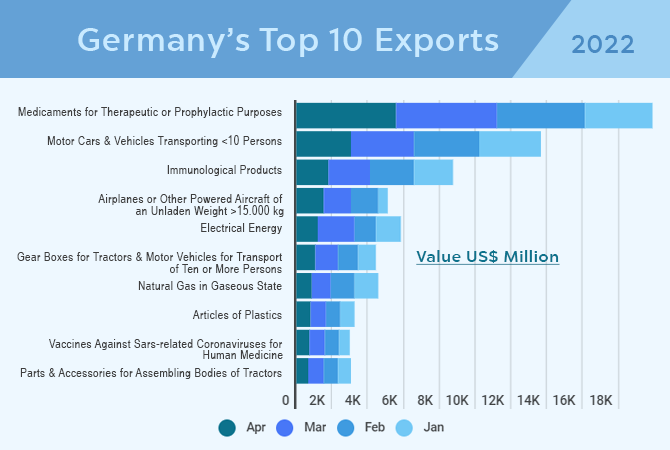 Germany imported natural gas in the gaseous state the most in April 2022, followed by crude petroleum oil, lactams, medicaments for therapeutic or prophylactic purposes, data processing machines, gas oils, immunological products, smartphones for wireless networks, gold, and lithium-ion accumulators. Take a look at the stats of these commodities recorded from January to April 2022. 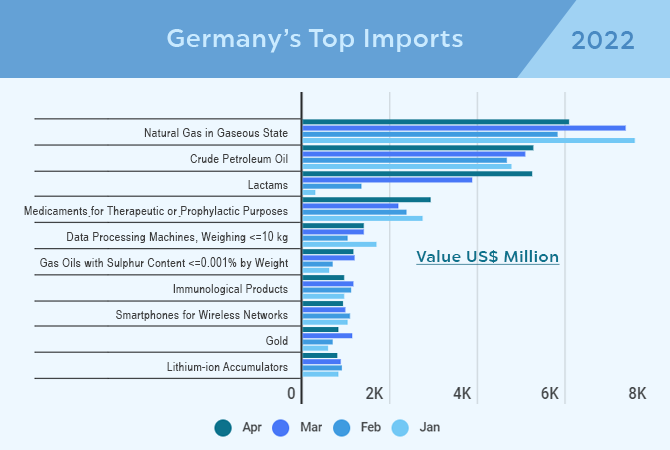 Inflation is a Major Concern

German’s dominant manufacturing base has faced disruption from global supply chain problems caused by the Covid-19 pandemic and lockdowns in China. Soaring energy prices and weaker demand for commodities are also hitting the German market. According to the reports, prices for imports such as food, energy, and industrial components increased by more than 30% in May compared with a year ago, while export prices rose at about half the rate.

Russia’s invasion of Ukraine is pushing energy prices up across Europe, driving up inflation, and affecting the trade balance of countries dependent on oil and gas imports for much of their energy needs.

For the first time in more than three decades, Germany posted a monthly trade deficit in May 2022. Europe’s largest economy is facing stress because of a disrupted supply chain and record energy prices linked to Russia’s invasion of Ukraine. As the war continues, Germany is likely to face major trade challenges in the second half of the year.