India is largest producer and exporter of spices around the globe. USA and Vietnam are the main markets for Indian Spices while the maximum shipments of spices departs from Mundra Sea. It has the largest domestic market for spices with 109 varieties listed by ISO (International Organisation for Standardization) in the world. India exports around 75 varieties of spices and it primarily exports cumin, red chilli, pepper, turmeric, green cardamom, fennel, black pepper, coriander, ginger etc. The spices come under HS code 09. Spices in India have been grown in small land holdings with organic farming gaining importance in modern times. These are most sought after globally specified their quality, taste and medicinal values.

If we check the recent stats of Q2 2017 (April-June), India did spice export business of USD 546.47 million. As per the Indian spices export statistics, the month wise analysis shows that the value of USD 245.15 million, USD 166.03 million, USD 135.28 million recorded in the month of April, May and June 2017 respectively. It registered 33% of the sales from the spices under HS code 09093129 and recorded highest value of USD 184535671 from this product during the same period. Let’s take a comprehensive look at the detailed analysis of export of spices from India on the basis of varieties, exporting companies, destination countries and Indian Ports.

During April-June 2017, India has exported 62 varieties of Spices in its destination countries. Top spices exports from India are Cumin, Red Chilli, Pepper and Turmeric. These varieties of Indian spices exports approximately 70% of the total exports in Q2 of 2017. Cumin is the most exported spices from India as India did USD 212 million i.e. 39% of the spices exports from Cumin only during April-June 2017. Cumin is the dried, white fruit with greyish brown in colour of a small slender with annual herb. Red chilli is the other most exporting Indian spices which did USD 100.57 million i.e. 18.40% of the spices exports in the same period. Chilli is the dried ripe fruit of the genus capsicum. Go through the following table to check the list of most exported spice varieties from India. 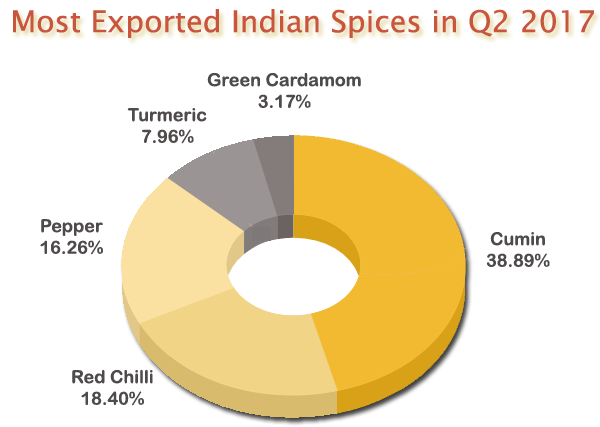 Want to sell spices outside India? You must know that how many types of spices are exporting from India and who are its top destination countries. In our Indian Spices Export Data, you will get all the complete details like spices buyers in other countries.

Export of Spices from India Highest to USA and Vietnam

India is exporting spices to around 140 countries across the world. It did spice export business of USD 130 million from Unites States of America which represents 23.96% of the total export of Indian spices. Around 45 varieties of spices have been exported to USA during Q2 of 2017. Cumin is the most demanded Indian Spices in United States which recorded 18.61% of the total’s value. USA is followed by Vietnam, UAE, Thailand and Malaysia in the list of top countries who received maximum shipments of spices from India.

India recorded spices exports of USD 109 million from Vietnam which represents 20.10% of total’s output. The varieties like red chilli, pepper, cumin and fennel are the most demanded Indian spices in Vietnam. The other top countries such as United Arab of Emirates and Thailand received Indian spices with the value of USD 27 million and USD 25 million respectively during April-June 2017. Refer the below table to check the top destination countries of India. 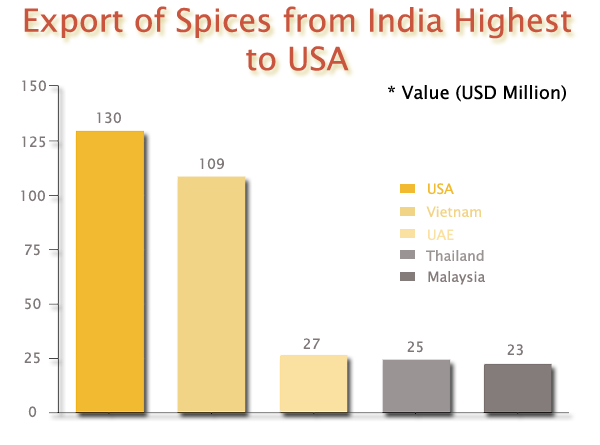 In Indian spices export data, you will access the complete list of spices companies in India with the other details like its destination country, total value, shares etc.

India did spice export business from 56 ports during the second quarter of year 2017. More than half of shipments of Indian spices has received from mainly three Indian port namely Mundra Sea, JNPT and Kattupalli Port Sea. As per the Indian spices export statistics, India has departed maximum shipments from Mundra Sea and recorded USD 182 million which is 33.45% of total exports. More than 40 varieties of spices have departed from this port from April-June 2017.

JNPT recorded second highest shipments of Indian Spices. India did spices exports of USD 82 million during Q2 of 2017 which represents 15.18% of total’s output. Turmeric and Red Chilli are the most exported Indian Spices from JNPT with the value of USD 25 million and USD 19 million respectively. Go through the following table to check the biggest Indian ports which have departed maximum shipments. 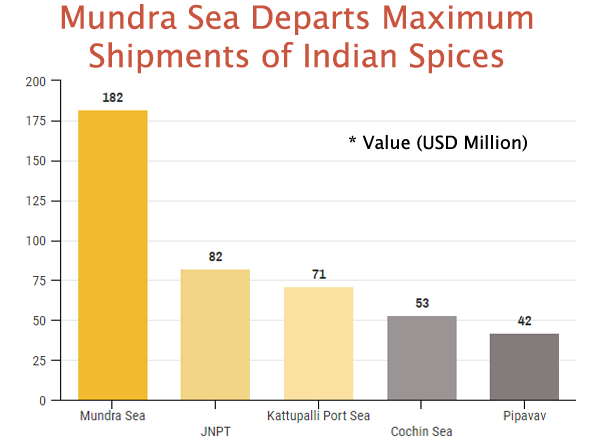 Spices Export Board in India – A Way to Promote Abroad

Spices Export Board of India and Spices Export Promotion Council of India are the best way to promote your export business on a large scale across the world. Indian spices board works towards the development and worldwide promotion of Indian spices. It provides quality control & certification, registers exporters, trade information and also provides input to the central government on policy matters. The board is an international link between the Indian Spices exporters and importers abroad. The board participates in major international fairs and food exhibitions to promote Indian spices apart from organising various domestic events. Export promotion of all spices through support for technology & quality upgradation, brand promotion and research & product development.

Want to sell Indian spices in other countries? You must know about the destination countries of Indian spices with the name of its buyers. Let’s go through the sample of Spices Export Data of India in the given table below.

The other shipment details like company names, at what rates they are buying from Indian exporters etc. We provide analytical report as per HS code, specifications and varieties.

Access the Indian spices export report which is analysed on the basis of HS codes, spice varieties, exporters, destination countries, Indian ports etc. Here is what you will gain from our analytical report.

·         What varieties of spices are exporting from India?

·         Get the shipments details of exporters of Indian Spices.

·         Which are the destination countries of Indian spices?

·         Name of Indian ports which departs maximum shipments of spices.