India’s exports of rice valued to USD 7076 million in 2017, which rose sharply from 2016’s USD 5315 million. The country maximum exports non-organic rice, which recorded value of USD 7038 million in 2017, while organic rice registered USD 38 million export value during same year. This means non-organic rice shared 99.46% value to India’s total rice exports. Basmati rice is the largest exported category of rice, which shared 56.63% value to total rice exports. According to Export Genius rice export data of 2017, India supplies rice mostly to Arab countries, in which Iran, Saudi Arabia, United Arab Emirates and Iraq stood among top rice export partners of India. Let’s put every India export statistics of rice recorded in 2017 in a systematic form so that we can analyse rice export market of India in a better way.

India is popular for its rice cultivation all over the world. As per a statistical report, rice production in India coves around 46% of the total food crop production and 20% of world rice production. Rice (HS Code 1006) is India’s pre-eminent crop and staple food of the people living in southern and eastern parts of the country. The production of rice in India is estimated to be about 105 million tons in a year. Being a tropical plant, rice flourishes with ease in hot and humid Indian climate, especially in the areas receiving heavy rainfall. This crop demands more than 100cm rainfall and average temperature of 25 degree Celsius. West Bengal tops the list of top rice producing states of India, followed by Uttar Pradesh, Punjab, Odisha, Andhra Pradesh, Bihar, Chhattisgarh, Tamil Nadu, Assam, Telangana, Haryana and Madhya Pradesh. So, India is among the top rice exporting countries in the world.

According to All India Rice Exporters Association (AIREA), more than 90% of world rice is grown and consumes in Asia. It is the apex body for Indian rice exporters around the globe. Since 2016, India’s exports of rice have been rising substantially and it is likely to rise further because of two major reasons. One, Indian rice exports to Bangladesh is likely to jump as rice crop has been damaged after flooding into the country. Second reason is that Iran has resumed basmati rice imports from India as the country restarted rice import registration this year from Jan 21 till Jun 21. Every year, Iran bans rice imports during the rice harvest season (July-January) in support of local farmers and domestic production.

According to 2017 report on export of rice from India, the maximum rice export shipments valued USD 845 million recorded in the June month. February, March, August, September, October and November were slow down months for India’s rice exports. However, January, April, July and December recorded above USD 600 million export value of rice. Here is an overview of India’s export of rice during months of year 2017. 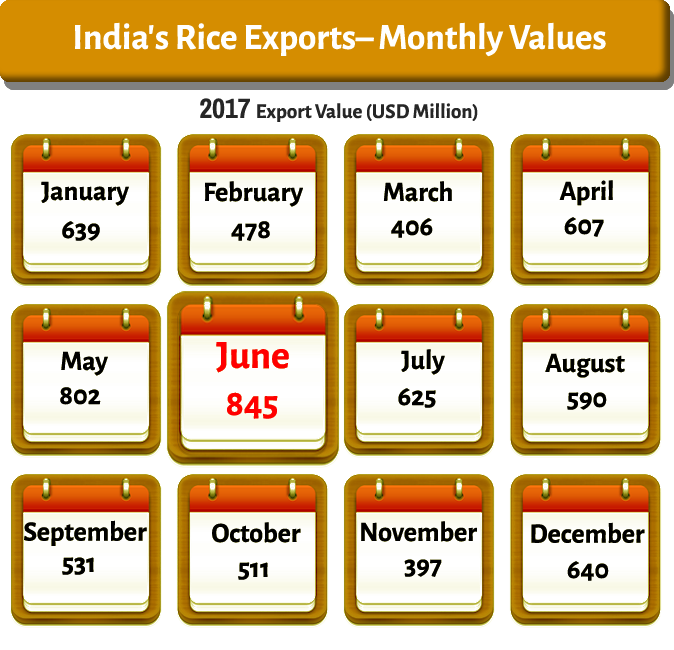 Rice manufacturers in India maximum export basmati rice, which is semi-milled or wholly milled under HS Code 10063020. Basmati rice export data shows that this rice category shared more than half value of the total rice exports during 2017. Parboiled rice, which comes under HS Code 10063010, stood as the 2nd largest rice category with over 25% share in value. Broken rice and husked (brown) rice managed to get into top 5 rice categories that are exported by India. Through chart and table given below, check the market size of various rice categories exported from India. 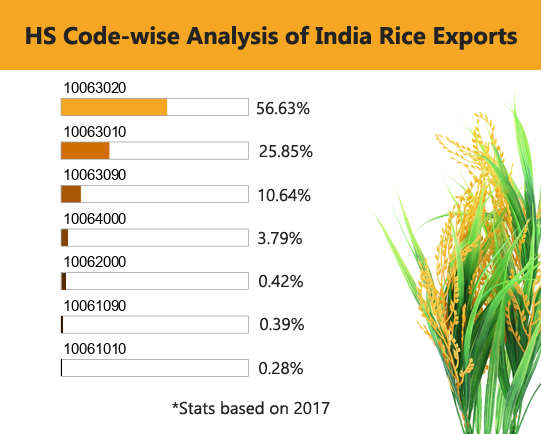 India exports different types of rice, among which Sella rice is exported the most to the world. Export Genius report on India rice export in which rice exporters in India are also covered, shows that India’s exports of Sella rice amounted to USD 2329 million in year 2017. Parboiled rice and broken rice stood as the 2nd and 3rd largest rice types that were exported by India in the said year. The below given chart and table shows India export statistics of top rice types recorded in 2017. 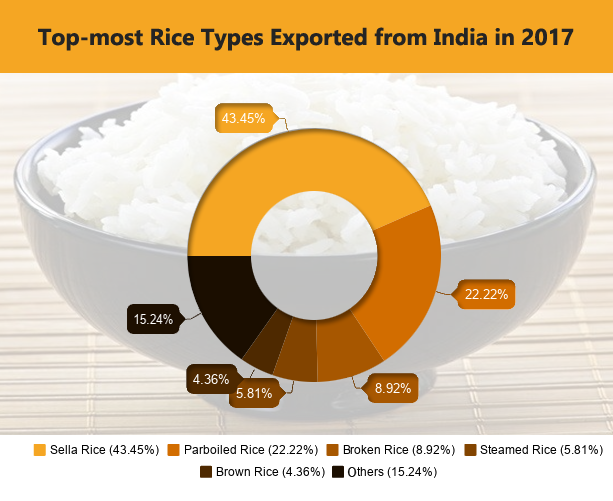 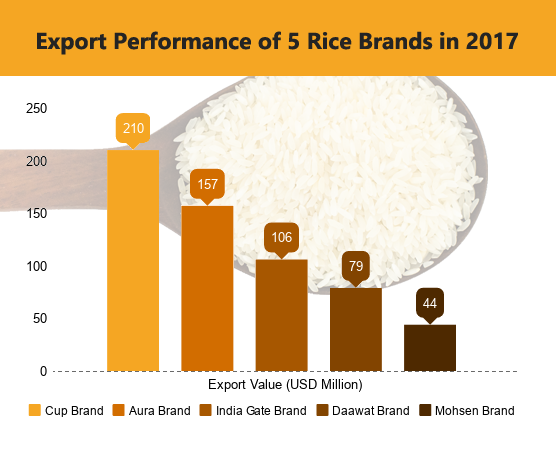 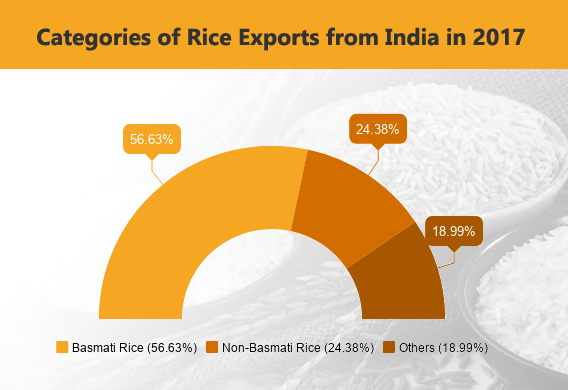 India’s largest buyers of rice are Arab states. In fact, rice suppliers in India exports rice varieties mostly to Iran, Saudi Arabia, United Arab Emirates and Iraq. The consumption of rice in these countries is far larger than other nations around the world. Recently, Iran has resumed rice imports from India and restarted import registration from Jan 21 2017 to Jun 21 2017. According to India rice export data, the country exported rice valued USD 2850 million to Arab states in 2017. This means, Arab states shared 40.28% value to India’s total rice exports in the said year. How other regions imported rice from India? Let’s find out from the chart and table given below. 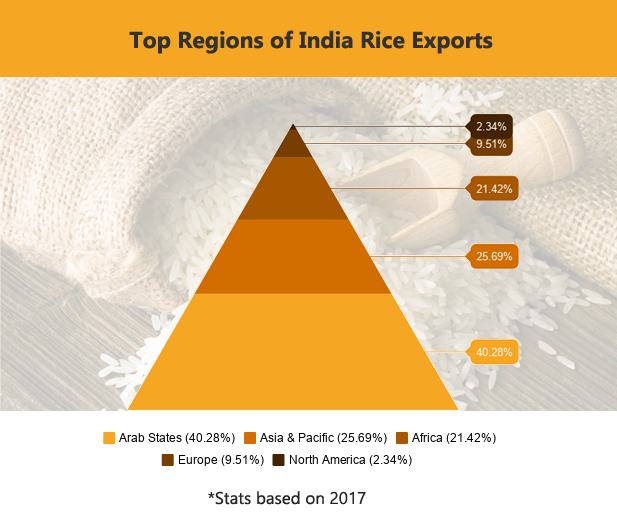 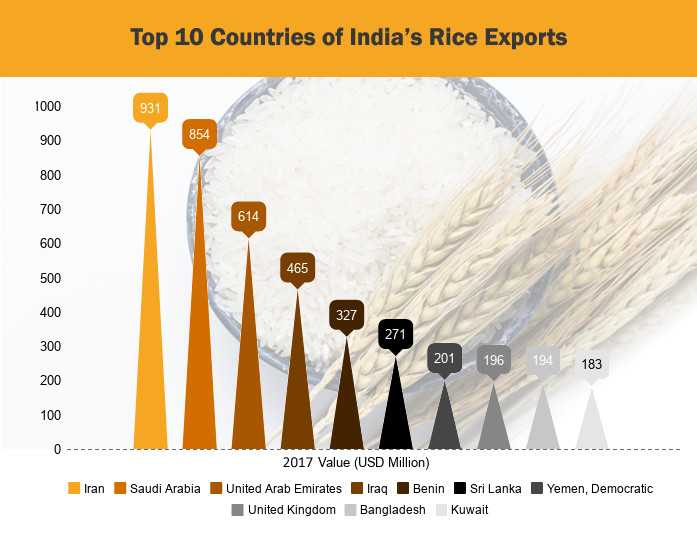 Traditionally, the world’s 4th largest rice producer in the world, Bangladesh emerged as a major importer of rice in 2017 after floods damaged crops and pushed domestic prices to record highs. And it looks like that Bangladesh and Sri Lanka will continue to buy rice from India aggressively. 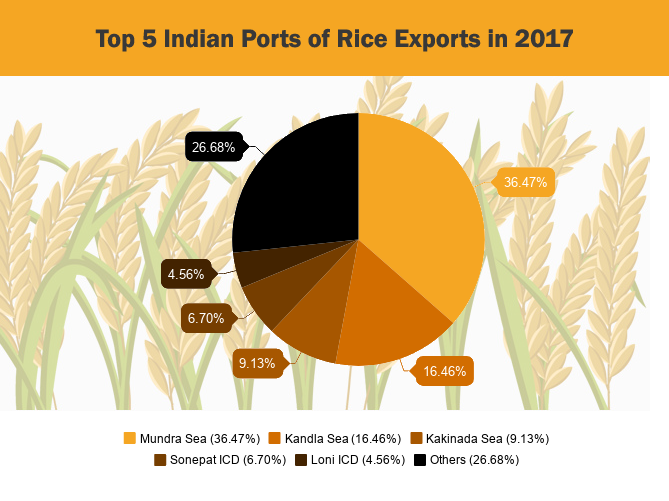 Are you a rice supplier in India and want to export rice from India to any country in the world? Or are you a rice buyer in Iran and want to import rice from India? Export Genius report on rice exports from India will take you through Indian rice exporters and foreign rice importers so that you can find active and genuine business partners. So, what our India export data of rice contains? Check out the sample below.

Our India export information on rice based on actual shipment records will actually benefits you at a large. Let’s make a list of these advantages right below:

·         Check rice shipments of your competitors to beat them in the market.

·         Identify most exported rice type from India and do market analysis of basmati and non-basmati rice.

·         Research companies can use information from our report and do better analysis of Indian rice market to come up with more accurate findings & conclusions.

So, what are you waiting for? If you are looking for complete Indian export report of rice with 100% authentic shipment information, request for a demo first.