The top countries belonging to the European Union considered the potential for trade with India includes Germany, France, and the UK (before Brexit). While trade of these countries with India received an upward trend and a substantial increase initially but didn’t actually record a significant increase in the growth of trade values. 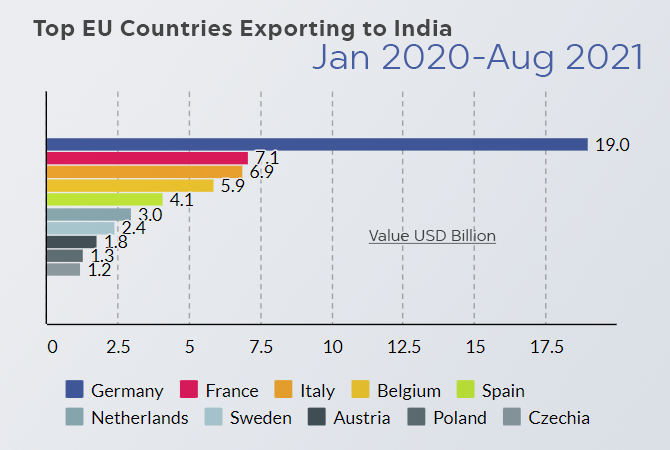 Since the first EU-India summit in 2000, both regions have collaboratively worked on various initiatives such as climate change, sustainable development, etc. India and the European Union have recently resumed their negotiations on the Free Trade Agreement (FTA), dated 8 May 2021, taking key factors into account from the 1994 Cooperation Agreement between the countries.

The growth for trade between regions recorded a downfall by 8.07% in imports and 14.03% in exports. India’s growing regional and international significance is crucial for the EU’s economical, political and military growth and development. Acquire trade insights on imports and exports of India with other countries, or EU countries, from our largest trade database. With the help of our robust trade coverage, grow your business with relevant trade information.