Crude petroleum oil exports from the Organization of the Petroleum Exporting Countries (OPEC) were increased in 2021 and stood at US$314,959 million approx. as compared to US$267,024 million approx. in 2020 (excluding Saudi Arabia). Saudi Arabia is the world’s biggest exporter of crude petroleum oil, followed by Iraq, and the United Arab Emirates. OPEC countries shared about 40% of the total world’s crude oil exports in 2021. Here’s a bigger picture of crude oil exports from OPEC. 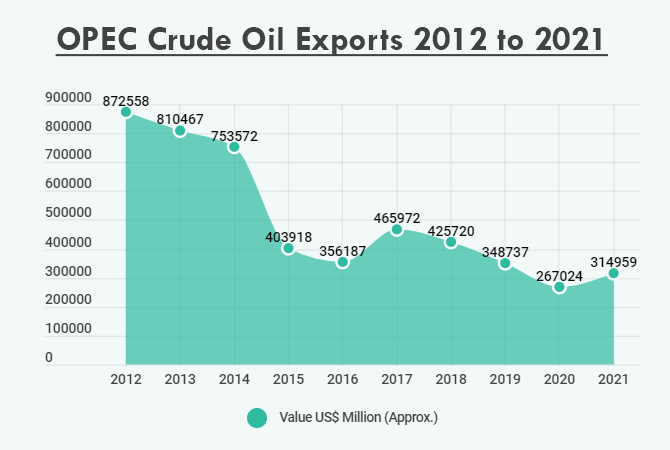 OPEC crude oil exports shared about 38% of the world’s oil exports in 2021 (excluding Saudi Arabia). In this total market share, Iraq stood as the top OPEC exporter country of crude oil with a share of 9%, followed by the United Arab Emirates with 8.8%. Below given chart shows the value in percentile of OPEC top exporting countries to crude petroleum oil (excluding Saudi Arabia) reported in 2021. 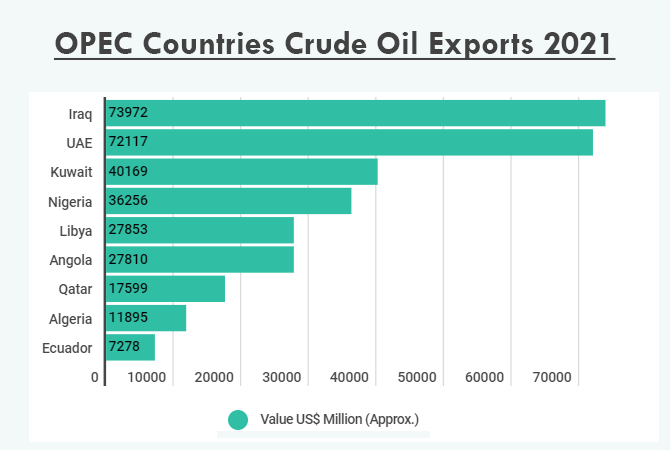 Which Countries Imported Crude Oil from OPEC Countries in 2021?

Asia countries including China, India, Japan, and South Korea import the highest quantity of crude petroleum oil from the OPEC nations. In 2021, China imported about US$79,241 worth of crude oil from OPEC nations, followed by India with a value of US$54,836 million. These values are approx. The highest number of shipments comes from Saudi Arabia. Here’s a list of the top 10 importer countries with their approx. values of crude oil purchased from OPEC countries in 2021. 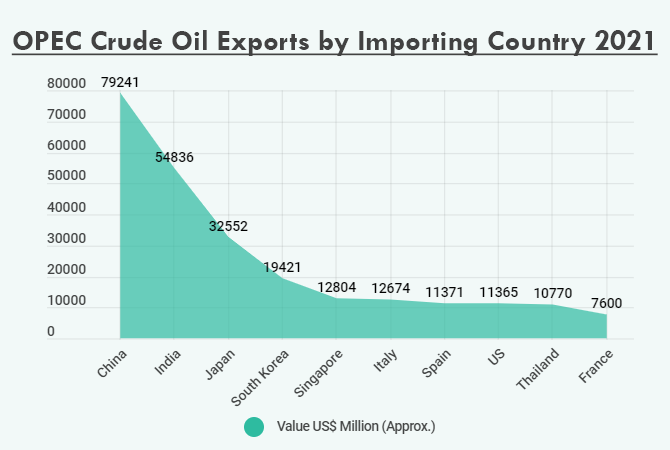 As Russia is not a member of OPEC, so the crude oil exports from OPEC countries are expected to increase in 2022 due to the ongoing Russia-Ukraine war. Many European countries and other nations are planning to phase out imports of Russian oil, hence they may import oil from the OPEC countries. Therefore, OPEC nations are likely to see a growth in the crude petroleum industry.