China Imports of Car from Germany and the United States

In a move to de-escalate recent trade tensions between China and the United States of America, China is planning to lower tariffs on car imports this year. According to the latest data collected by Export Genius from various sources on China-US trade,   currently, China import tariff rates on finished vehicles including motor cars is 25%. China’s plan to reduce import tariffs on cars will let foreign car manufacturers to enter a joint venture with a Chinese company in order to produce cars in the domestic market. Our report on automotive industry in China provides a comprehensive analysis of motor cars import in China with special focus on export car to China from USA and Germany.

Chinese president Xi Jinping announced strategical plans to lower down Chinese tariffs on imports of cars. This will help foreign car companies to receive better Chinese market access and improved investment opportunities. The latest comments of Chinese president have triggered fears of trade war after the US proposed a raft of new tariffs applying to Chinese goods imported to the US and China retaliated with a list of US goods that it would add 25% tariffs to. Unless and until, US implements new tariff policy on importing Chinese products, China would not implement its plan to reduce tariffs on importing cars from the US.

In last two years, imports of cars in China valued above USD 40 billion mark. According to a report on car import data of China, the country purchased 1064290 pieces of motor cars in 2016, which decreased from the previous year’s 1094655 pieces. During last 5 years shipment data of cars, China purchased maximum number of cars in 2014 valued at USD 59 billion. 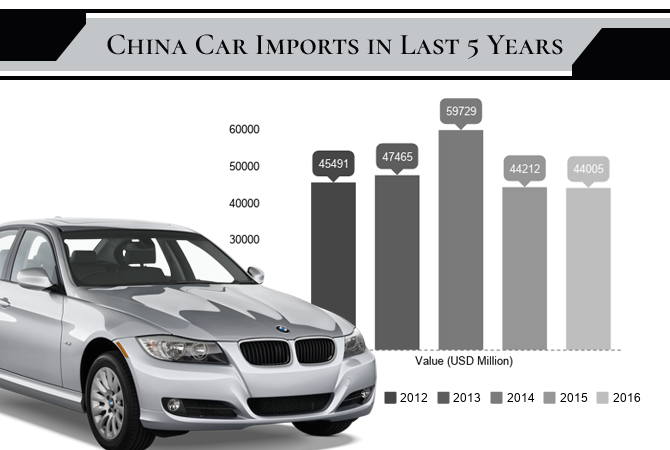 According to automotive industry experts, if China implements its plans to reduce import tariffs on cars this year, it would encourage demand for importing Britain’s every growing range of premium, luxury and sport vehicles. China is a crucial bilateral trading partner of the United Kingdom in terms of materials and components. Automotive countries in both countries are investing heavily in each other’s nations under UK-China trading relationship, which respects free and fair trade between both the nations.

China Imports Cars from Germany and the US

In 2016, China imported cars maximum from Germany, followed by the United States of America. But both the countries are giving a tough completion as there is not much difference in their values. China’s imports of cars from Germany recorded 27.2% share in value and US exporting cars to China recorded 27% share in value in the said year.

The highest number of car shipments valued USD 11 billion arrived in China from Germany in 2016. Since 2012, there have been fluctuations in values as Germany supplied cars to China valued USD 17 billion, which was highest in the last five years. In 2013, the figures fell down and in 2014, these increased. And then, year 2015 and 2016 recorded a shortfall in the cars imports of China from Germany. Here 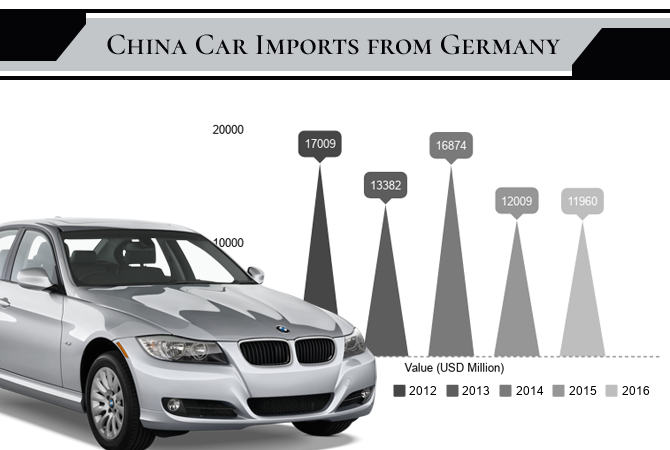 Our market research report on imports of cars into China gives in-depth knowledge of car market, information about top buyers of cars in China and also foreign suppliers of cars, particularly Germany exporters of cars. Car business people in China and Germany can buy our report to have complete and accurate analysis of car imports in China. Here is a sample on China imports car from Germany.

China’s 2nd largest car import partner was the United States of America in 2016. The country purchased cars valued USD 11 billion from the US in the said year. Since 2012, China import cars from USA have been rising, but figures slightly fell in 2015 and 2016. Here is a look at China import statistics of cars from the US recorded in the last 5 years. 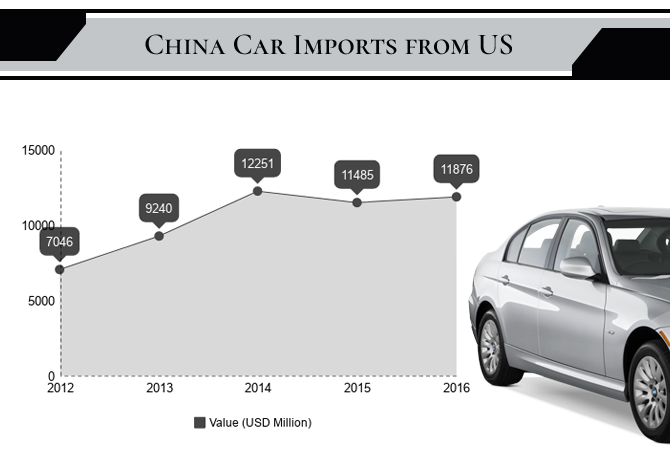 China has one of the major import markets of cars in the world. So, the United States of America, apart from Germany are seeing a rising business growth in the automotive industry in China. If you as US supplier of cars are looking for exporting your products into China, you can get list of active car buyers in China from our report. Check out the sample of China imports car from the US given below.