China’s crude oil imports sustained an upward trend of US$229 billion in 2021, but sky-high global oil prices may pull down the growth in 2022. Saudi Arabia and Russia continued to be the top oil supplier to China, with the combined market share of 33% reported last year. Amid rising global oil prices due to the ongoing Russia-Ukraine, China is expected to receive less oil from Russia this year. Here’s an in-depth analysis of China’s crude oil market.

From where does China gets crude oil?

China received most of the oil shipments from the Middle-East countries including Saudi Arabia, Russia, Iraq, Oman, Kuwait, and the United Arab Emirates in 2021. According to our database, China crude oil imports from the Middle East nations shared over 64% of the overall value of shipments last year. Here’s data visualization of China’s top 10 import sources of crude oil recorded in 2021. 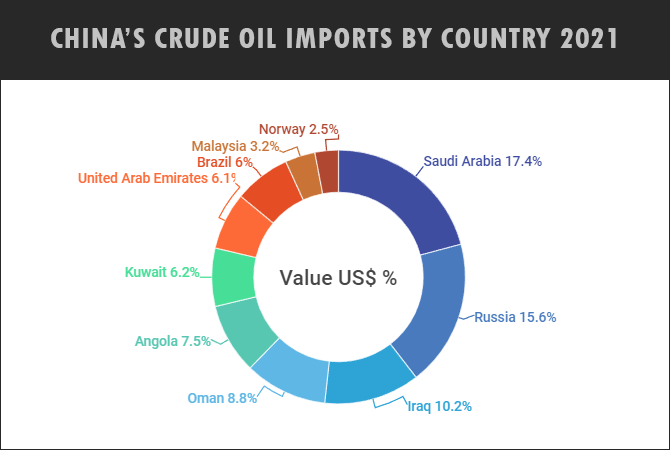 Saudi Arabia and Russia are the primary oil sources for China

From the last quarter of 2020 to 2021, China’s crude oil imports from Saudi Arabia and Russia have increased and reached the US$12 billion mark. Like India, China is also getting crude from Russia despite high crude prices in the global market and shortage due to Russia’s invasion of Ukraine. Access crucial China import data of crude oil online to exactly understand the real picture of China’s trade of oil with Saudi Arabia and Russia. 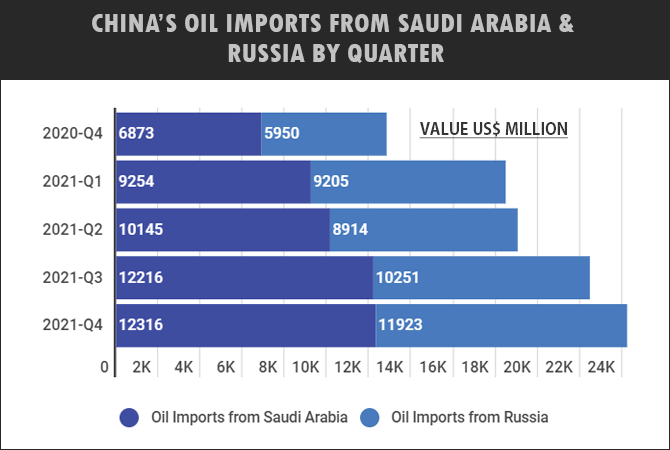 If we see China’s crude oil import trends for the last ten years, we found that China imported US$220 billion worth of crude oil in 2012, that dollar amount declined in 2013 and later increased in 2014. China’s imports of oil fell drastically for the two consecutive years thereafter. The years 2018 and 2019 saw a growth in the value of imports, however, in 2020, the value of shipments declined, which increased in 2021. The following chart shows China’s crude oil yearly import trends. 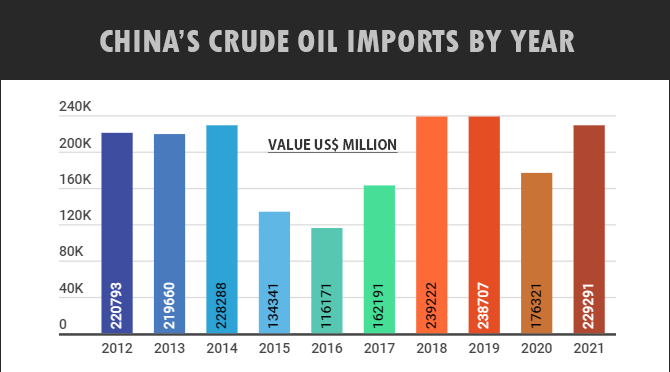 China is expected to receive more crude oil from Russia despite Russia’s invasion of Ukraine as both countries enjoy a healthy bilateral trade relationship. But due to the disrupted global supply chain and high crude prices in the international market, China’s imports of crude oil may fall down in 2022.