According to the figure received from China’s main industry group for Chinese automotive industry – Association of Automobile Manufacturers (CAAM), the sales records for the month of March show the spike in the sales of automobiles up to 74.9% year-on-year. Auto sales have spiked for yet another month, making it a 12th consecutive month of gain. Get the exclusive data of China’ automobile industry trade from Export Genius.

The following is the vehicles export data of China for the year 2020. China exported automobiles (or vehicles) the highest to the USA with a share of 18.4% in the overall trade, followed by Japan with a share of 5.2%, Mexico and Germany both with a share of 4%, and so on. Look at the data for automobile export of China in 2020. 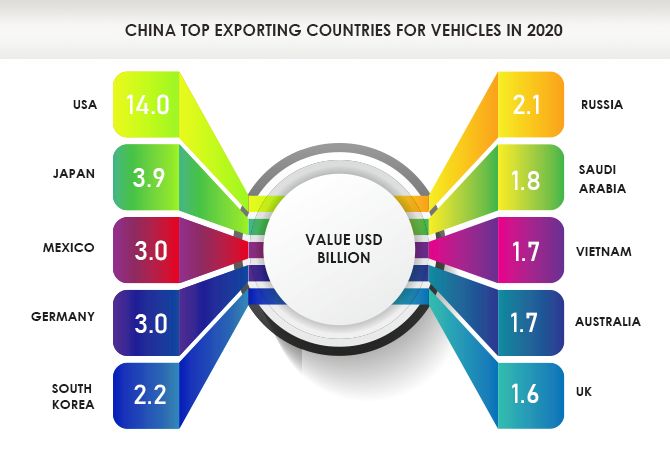 Car market of China have been receiving good figures from the time pandemic started to spread across the globe. The data retrieved through China Association of Automobile Manufacturers (CAAM) shows that sales for the car market has recorded a value of 2.53 Million in March 2021.

Sales of New Energy Vehicles (NEVs) such as battery-powered electric vehicles, plug-in petrol-electric hybrids and hydrogen fuel-cell vehicles increased 239% in March to 226,000 units. The new reports from the car market of China shows that many NEVs makers such as Chinese home-grown Nio Inc. and Xpeng Inc. along with other foreign groups such as Elon Musk’s Tesla, are working on to expanding the manufacturing in China. The makers believe that Chinese manufacturing will result in an overall reduced air pollution environment by promoting the greener vehicles. China has also shown support to the makers, limited to the makers belonging from the China automobile industry, by providing the subsidies and looser restrictions while building out of charging infrastructure.

The Chinese auto industry body, China Passenger Car Association said in their statement on Friday that sales figures of China-made Tesla cars show the value of 35,478.

The official from the aforementioned company CAAM mentioned that the shortages in the supply of the semiconductor chips might going to cause a big problem for the production of China’s automobiles in the second quarter than in the first.