The Chilean prune export season in 2021 is likely to experience severe shortage in volume and to increase in prices as well. In February, Chile recorded harsh and heavy rainfall, which has caused severe damage to various key fruit crops in harvest season like plums. According to market research reports, around 40% estimated decline of crop production is expected as compared to last season. This will directly harm to the Chilean prune exports as prices are need to increase for avoiding engaging in new markets. As a result, Chile’s position as top prune exporter in the world will come down and the situation will bring opportunities for other suppliers. Export Genius market research report gives an outlook of Chile’s prunes export market and possible impact on global market due to shortage.

Unexpected heavy rains damaged the growing areas in February when most of the fruit was ready for harvest. Producers in Chile were expecting between 70,000 to 75,000 tons of harvest plums. Chileprunes estimates that the actual production of prunes was reduced between 40,000 to 45,000 tons, which is a 40% decline from what was expected.

Prune exporters in Chile left with low stocks of fruit due to damage caused by rains, which worsened the situation. Not only Chile, France, another major exporter of fruit, has also reported forecasting 35% decline from its previous season due to snowfall in French producing areas. Similarly, to Chile and France, Argentina is also expected to lost about 12,000 tons of its production due to heavy snowfalls. This will led to an increase in the global demand for prunes due to supply shortage and rise in prices of this product.

Chile is a leading exporter country of prunes, accounting for over 30% of the global export share. According to the Fruit Exporters from Chile Association (ASOEX), the Chilean prune export volume declined by 14% during the first quarter of 2021 as compared to the previous year. See market share of world’s top 10 exporter countries of prunes 2020. 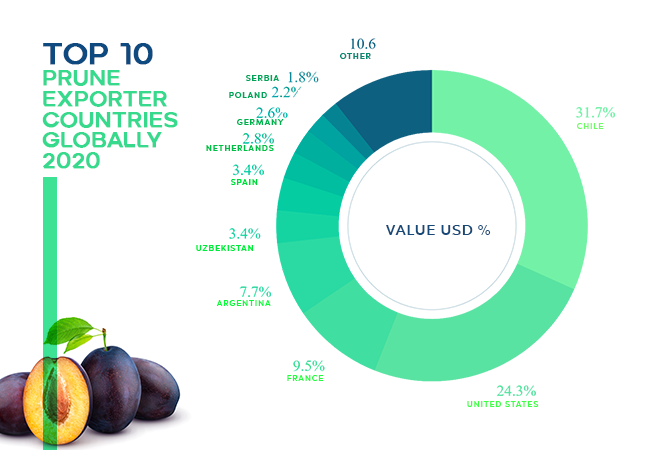 Since 2016, the value of Chile prune exports kept on fluctuating. Below given chart shows dollar of prunes exports from Chile reported from 2016 to 2020. 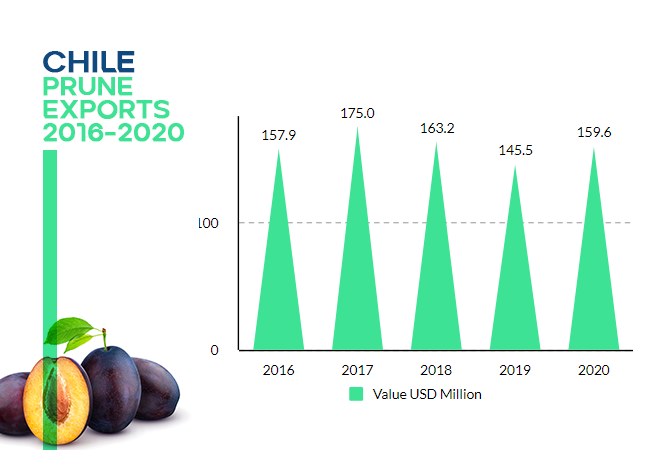 Chile’s top export destination of prunes are Poland, Germany, Mexico, Russia, United Kingdom, China, Italy, Spain, Australia and Brazil. They together accounted for 70.6% to overall value of shipments reported in 2020. See share in value of these countries that contributed to Chile’s prune exports in 2020. 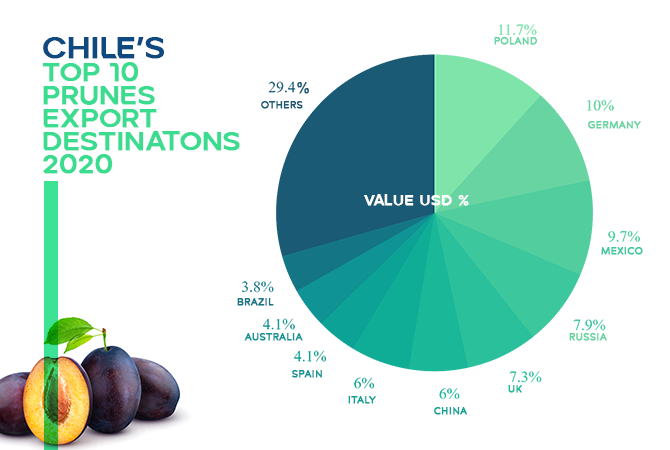 Chile supplies dry prunes to around 70 countries in different regions. According to Chile export data, Chile’s exports valued USD 159.6 million in 2020. Its major markets are Central Europe and Mexico. The leading export destination of Chilean prunes was Poland, Germany and Mexico. Although there was not major impact on Chile’s prune exports last year amid Covid-19 pandemic restrictions; however, Chile’s promotional efforts to open new promising markets will have to paused this year due to country’s supply shortage this season.

The shortage of prunes will have a global impact on the different suppliers and markets. As we know Chilean prunes known to be good quality and has nutritional values; fruit damaged due to unexpected rainfall will led to rise in prices and global shortage. Other key players France and Argentina also saw unusual weather activities that resulted in poor production of prunes and certainly the situation will impact the global market.

Who will be the main beneficiary of this situation?

The United States will be the main beneficiary from this situation as Californian prunes have not reported any shortages in their production this season and will be available in full for the market. The U.S. is the second-largest exporter of dried prunes, accounting 24.3% of the global export share. Although the US covers most of the same Chilean markets in Europe, the US exporters of prunes will explore opportunities in increasing their shipments into traditional and new developing markets under an elevated international price.