In 2021, 90% of Chile’s cherry exports, worth more than US$1,600 million, were shipped to China, the world’s largest cherry market that consumes one-third of the fruit. Chile reported an increase in cherry exports to the world in the last four consecutive years. According to our database, China exported US$1,767 million worth of cherries in 2021. Chile is the world’s largest exporter of cherries with a market share of about 40%. Here’s a complete analysis of Chile’s cherry export market with accurate Chile export data of cherries that will help you develop data-driven business strategies.

Chile Cherries Export to China and the World by Quarter 2021 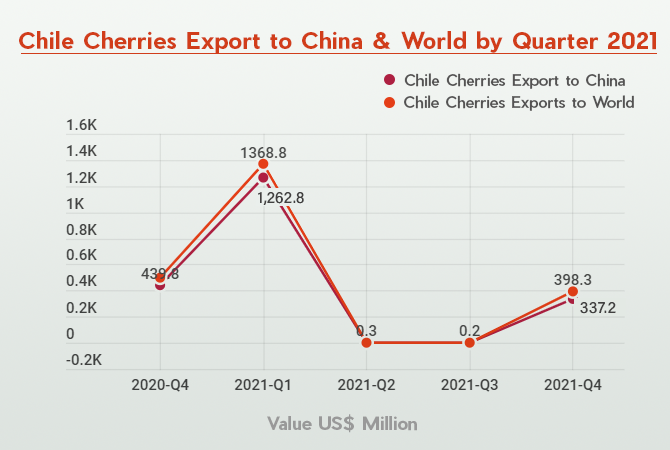 China Eastern Airlines said it would start air delivery of Chilean cherries from next week to Southeast Asia. The timings of shipments to China will depend on the situation of covid-19 controls. The carrier signed agreements with Chilean suppliers to purchase cherries worth US$230 million in Nov 2021. From Nov 8 to Jan, China Eastern sent one chartered flight for the fruit every data from Chile to China.

Chile Cherries Export to China and the World by Year 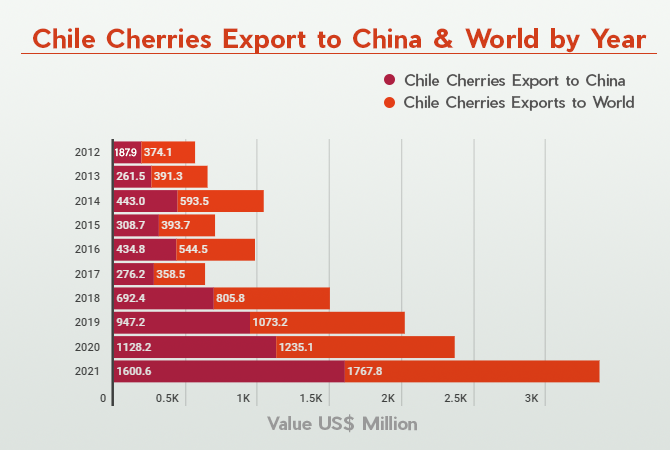 China is the top export destination of Chile’s cherries, with a market share of over 90% reported in 2021. According to our database, Chile’s other export destinations of cherries are South Korea, the United States, Taipei, Chinese, and the United Kingdom. See and analyze the trade values of these countries through the given chart. 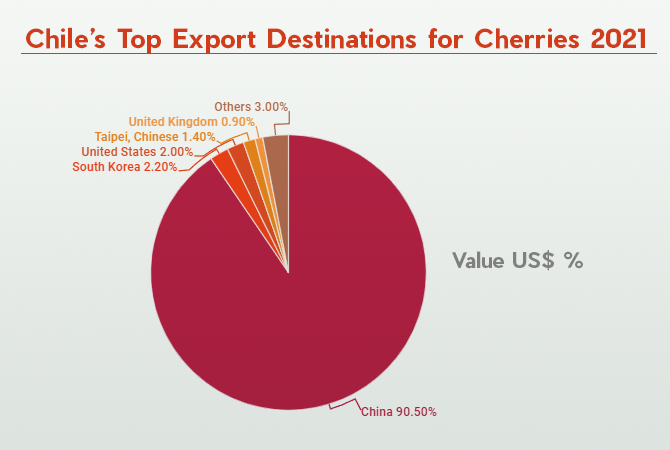 The Chilean industry experts predicted that cherry exports would increase in 2022 though logistics could be a huge challenge. Over the last four years, Chile has managed to capture the top position in the world’s cherry exports and it will continue to experience growth in the market. Experts believe that it is too soon to predict the new season, a better picture would be seen in October. Chile’s cherry season usually starts in October and ends in January.