Sugar is the world’s most popular sweetener and it is the generic name for sweet, soluble carbohydrates which are used in food. Most of the sugar produced globally derived from sugarcane and the rest from sugarbeet. Sugarcane is processed to extract to sugar which is fermented for ethanol product or used in food industry. Brazil is top sugar exporter as well as producer country in the world. It is accounting for approximately 40% of world sugar exports. Sugar has been an integral part of Brazil’s social and economic history. Nearly, two-third of the sugar produced in Brazil is destined for foreign markets. Brazil sugar export data shows that a value of USD 8.30 billion recorded during the year 2016. Approximately 80 countries around the world rely on sugar exports from Brazil that include India, China, Algeria and Bangladesh. Brazil sugar industry has shown a positive growth since 2014. The other leading raw cane sugar exporters in the world are Thailand, Guatemala and Mexico.

Here is the list of categories of sugar exports from Brazil as mentioned below.

Some developed countries like China, USA and UAE offer Brazil special import quotas it means Brazil will borrow sugar from these countries and then it will export in various countries. But these amounts are extremely small compared to the total volume of Brazilian sugar sales. Here, we take a comprehensive look at the Brazil exports of raw cane sugar in solid form not containing added flavouring or colouring matter which come under HS code 17011400.

During 2016, Brazil exported 23657804662 kilograms of sugar across the world. Brazil recorded least sales from sugar exports in January 2016 i.e. USD 318.82 million which represents 4.77% of total value while it registered highest sales in September i.e. USD 1032.88 million 11.40% of total sugar exports value. If we talk about particular period of months, Brazil did highest sales from sugar exports in Q3 of 2016 (July-September). It is the Brazil sugar export season in which 31% of total export sales recorded. Brazil exports mainly raw sugar in bulk vessels and the majority of exported sugar in the containers is crystal sugar. According to the sugar industry, Brazilian sugar exports in container have increased due to higher demand and alternative for buyers. Go through the following table to check the month wise analysis of raw sugar exports from Brazil in 2016. 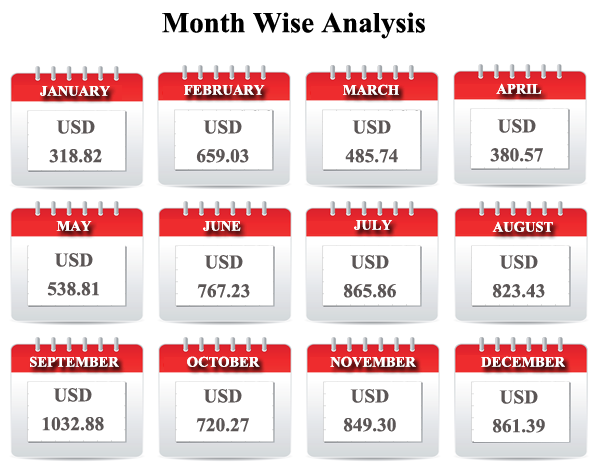 In 2016, Brazil has exported raw cane sugar to 77 countries around the globe including India, China, Russia, Canada, USA, UAE etc.  Brazil is mainly exporting cane sugars to top 5 countries i.e. India, China, Algeria, Bangladesh and Indonesia. Brazil did sugar export business of USD 889.17 million from India, USD 820.15 million from China and it did USD 700.05 million, USD 666.40 million, USD 587.44 million from Algeria, Bangladesh and Indonesia respectively.  A raise of 14% have seen in Brazil sugar Exports to India between 2012 and 2016 while it is declined by 11% to China and declined by 5% to Algeria during the same period.

In our Brazil Sugar export data, you will get the list of destination countries of Brazil to which it is exporting raw cane sugar. You will find total quantity exported with its weight unit. Check the following table to know Brazil sugar destination countries with the values recorded and also check its share values. 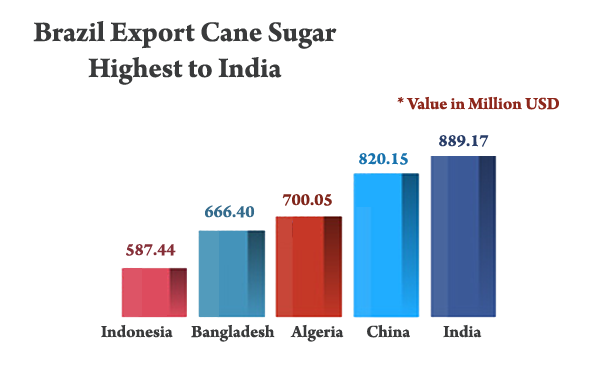 Here, we are providing the list of sugar exporters in Brazil.

ALVean Sugar SL of Indonesia is largest in sugar importers. It has imported cane sugar from Brazil with the value of USD 773 million in 2016. Some of the top sugar importers are given below.

You can access the complete list of sugar importers which is given in our sugar trade report. Also, you will know about total quantity, value of these importing companies.

Want to buy cane sugar from Brazil? Well, it depends on the sugar exporters in Brazil and their export prices. Go through the following sample of Cane Sugar Export Data of Brazil and you will get an idea about the shipment details of Brazil sugar exports.

Subscribe to Get Complete Sugar Export Report of Brazil

Get the analysed report of Brazil Sugar Exports and know what you gain from our report.

1.        Know at what rates the Brazil Sugar Exporters are exporting sugar to other countries.

2.        Find authentic sugar exporters in Brazil and its foreign importers with the company details.

3.        Our report will help you in generating new leads and tracking competitor’s shipments.

5.        Know various transport methods like sea/land/air through which Brazil exports cane sugar to other countries.