This year, China and Germany signed deals worth USD 23.6 billion, in addition to multiple joint cooperation projects between governmental agencies, companies such as BASF, BMW, Volkswagen, Daimler, Siemens and Bosch announced deals and partnership. Free trade plays a strong leading role for both countries and for global economy. Both countries want to sustain the system of WTO rules.

According to China-Germany Bilateral Trade Report, China got 1st rank in exports and 2nd rank in imports while Germany got 3rd rank in both exports and imports during 2017. China recorded USD 25 billion trade deficit with Germany and their bilateral trade worth USD 167 billion in the said year. Export Genius has released a report on China-Germany bilateral trade which is analysed on the basis of market trends, export & imports commodities. Our trade data of China and Germany is covered with comprehensive data columns including Chinese companies, HS Code, product description, value, quantity, port etc.

China imports more from Germany than its exports. China exports to Germany worth USD 71 billion while imports worth USD 96 billion in 2017. According to China-Germany trade statistics, the trade deficit was maximum in 2014 and then improved it by 50% in 2015. Refer the below table to check the export and import statistics of these two countries in last five years. 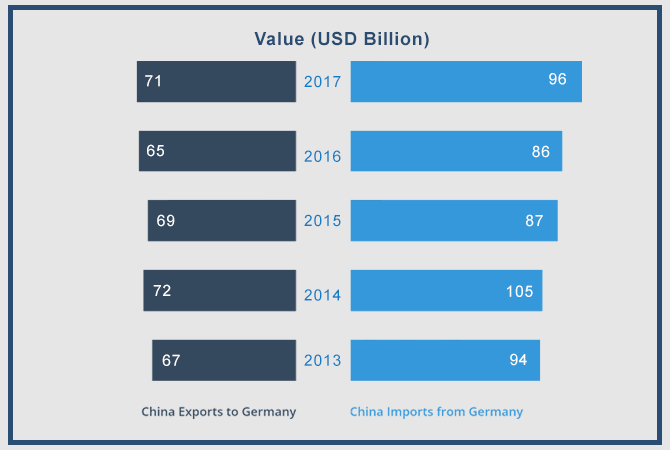 **Values are given in USD Billion

Germany is the 6th biggest goods export market of China and accounted for 3.1% of the total exports in 2017. According to China export data, machinery and mechanical appliances are its top export to Germany which worth USD 17.26 billion followed by electrical machinery worth USD 15.58 billion in 2017. The machinery export sale is raised by 1% of value while the sales of electrical machinery raised by 4% of value between 2013 and 2017. In machinery product group, automatic data processing machines, printing machinery, hand tools etc.

Electrical machinery and equipment is the second largest export of China to Germany worth USD 15.58 billion during 2017. China export sale of this product is raised by 4% of value since 2013 and telephone sets, electrical transformers, water heaters, diodes, semiconductor devices & electric generators are top exports in this category. Check the following table to know the top five China exports to Germany during 2017. 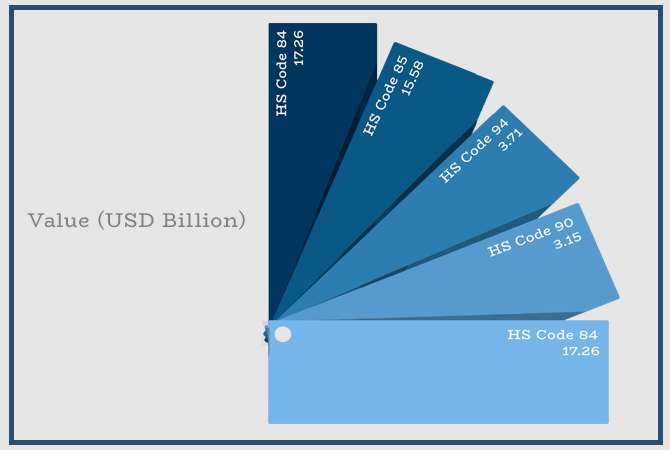 Germany is the 6th largest goods import source for China which accounted for 5.3% of the total imports. As per China import data, Vehicles, machinery and electrical machinery are the top commodities that China purchased majorly from Germany and together they accounted for 57% of the total imports during 2017. However, these commodities are slightly declined in last five years.

China vehicle imports from Germany worth USD 21.69 billion as Germany shipped 27% of the China China’s total vehicles in 2017 and the purchased is slow down by 4% of value since 2013. Cars, motor vehicle accessories are imported mainly in this product category.

Machinery and mechanical appliances stood as second largest import product of the country and its imports from Germany worth USD 21.12 billion while the imports of electrical machinery worth USD 12.11 billion in 2017. In this product category, top imports include machines, taps, cocks, transmission shafts, transfer machines and centrifuges. Here is the table representing the values of top five imports of China from Germany during 2017. 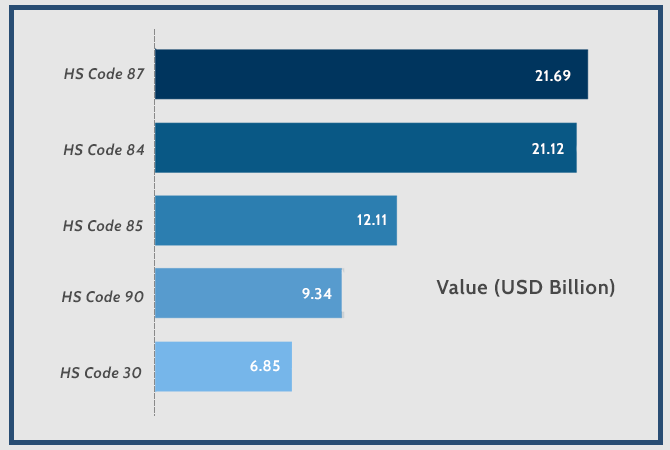 How to get China-Germany Bilateral Trade Data?

Due to US-China trade war, China is united with Germany in the trade to expand its markets and to improve their economies. They are world’s one of the biggest trading countries. To do export-import business in China or Germany, have a deep study of the market with the help of our research report based on accurate shipment records. For reference, look at the sample of China import from Germany and know the data columns.