Since 2004, Bangladesh averaged a GDP growth of 6.5% that has been largely driven by its exports of domestic agriculture products, remittances and ready-made garments. The country has pursued export-oriented industrialization with its key export sectors include leather goods, jute, fish & seafood, shipbuilding and textiles. It has also developed self-sufficient industries food processing, steel and pharmaceuticals.

Bangladesh has also witnessed a rapid growth in telecommunication sector and it has substantial reserves of natural gas. In fact, Bangladesh is the seventh largest gas producer in the Asian continent. Given Bangladesh’s population of 166.6 million people, its total value of export commodities of USD 45 billion in 2019 translates to roughly USD 275 for every resident in the South Asian country.

According to Bangladesh customs data, the country shipped knitted or crocheted apparel & clothing the most in 2019, which shared around 44% value to total exports. It was followed by not knitted or crocheted apparel & clothing, which also shared roughly more than 40% value to total exports. The following export product groups represent the highest percentage share in Bangladeshi global shipments during 2019. 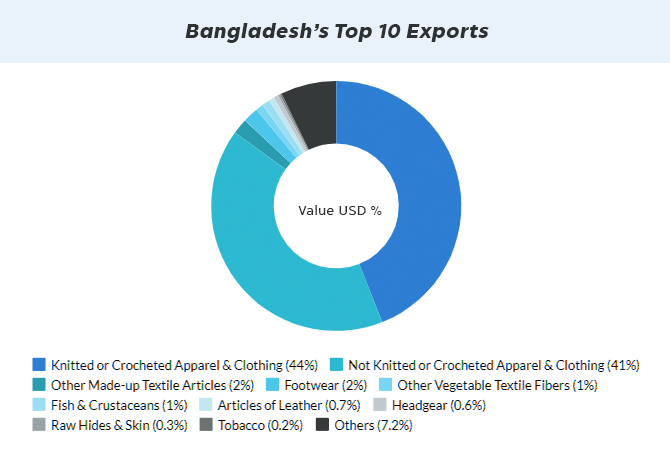 According to Bangladesh shipment data, the country shipped goods mostly to the United States, which roughly recorded 19% share in value. Other main export partners of Bangladesh are Germany, United Kingdom, Spain, France, Italy, Canada, Japan, Belgium and Netherlands. Check chart and table below to know estimated percentage share of these countries. 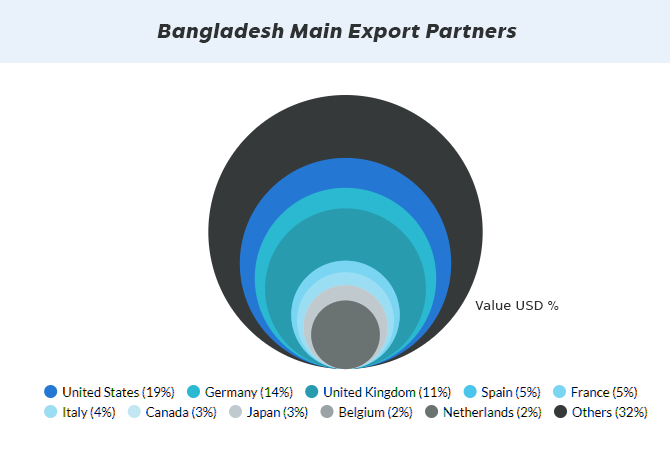 Get Bangladesh export data and expand export business in Bangladesh.

Bangladesh has a developing market economy. In nominal terms, the country’s economy is the 39th largest and 30th largest by purchasing power parity. In a bid to woo Bangladesh, China has provided a huge trade boost to the country by announcing tariff exemption for 97% of Bangladeshi products effective from 1st July 2020.

Based on the average exchange rate for 2019, the Bangladeshi taka depreciated by -8.3% against the US dollar since 2015 and declined by -1.2% from 2018 to 2019. The weaker local currency in Bangladesh makes its exports paid for in stronger US dollars relatively less expensive for international importers.

Bangladesh is strategically important for the economies of Northeast India, Bhutan and Nepal as Bangladeshi seaports provide maritime access for these regions & countries. China also take Bangladesh as a potential gateway for its landlocked southwest including Yunnan, Sichuan and Tibet.