Australia Benefitting India, But What About Dairy And Agriculture?

Recently, India's department of Commerce and Ministry, stated that bilateral trade between India and Australia has seen the share of a free trade agreement, according to which Australia is providing India with tariff concessions on 99% of goods. On Monday, the official authority claimed that an interim agreement with Australia will cover the major labour-oriented sectors such as agriculture, textiles, pharmaceuticals, footwear, leather goods.

Australia accounted for a total imports of worth $2.8 billion from India in 2020, as per Export Genius’s India trade database. The trade agreement between both countries highlighted 99% of imports from India, but doesn’t really state any concern to the products from dairy sector and agriculture of India as a one whole complete sector which is the second-largest production in the world. Industry experts suggest this as a state of concern since they believe that dairy and agriculture are sensitive sectors, concerning international competitiveness.

Below shown, India export data represents the top exported commodities from India to Australia for the year 2020. The top commodities are shown with their corresponding value of imports, in US a million dollars. Represented Australia imports 2020 is evaluated from Export Genius’s global trade database.

India exports to Australia accounted the most for pharmaceutical commodities with an export value of $283.6 million, followed by mineral fuels & oils with an export value of $257.7 million, and industrial machinery accounted for worth $203.3 million imports for the year 2020. Other top exports include commodities such as electronics & their parts, iron and steel articles, and so on. Look at the trade data of India below to see more commodities and their values.

India is the world’s largest producer of some key agricultural commodities such as pulses and spices, including the dairy sector’s commodities, a part of the agricultural sector, among which milk is highly valued in the international market. Indian dairy products are the most valued and highly rich commodities, demonstrating a high competition against other nations.

Canberra, the capital city of Australia, is looking forward to beginning exporting its dairy products, processed foods, grains, and oil seeds to India. The interim deal between countries might bring this into action, and industry experts, as aforementioned, fear this as this brings a threat to India’s dairy and agriculture sectors in its own territory by opening up the doors for other nations such as EU and UK to gain access to the domestic market and market their products.

Below shown, India export data 2021 shows a comparison between the exports made in 2020 and 2021 to Australia for the dairy industry. The month of December for 2021 is put to an exception by default as per the availability of India trade data 2021. Examine the shown trade data below to grasp the overview of Australian imports of dairy products from India. 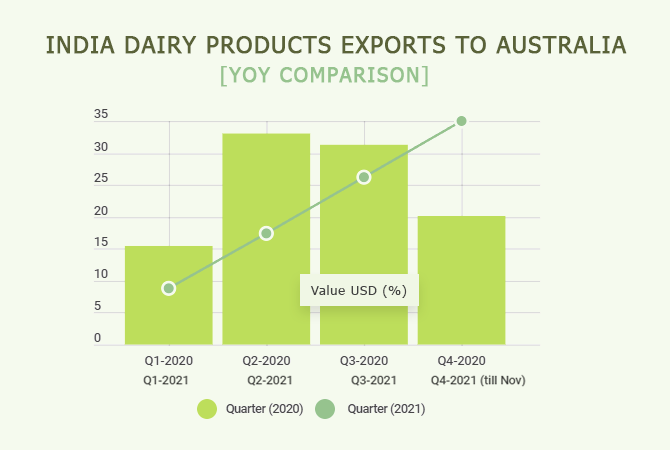 The Indian dairy sector is the largest agricultural commodity in the world, known for its high production of milk in the world, contributing around 5% to India’s economy. The dairy industry of India is valued at 11,357 billion in Indian currency for the year 2020. Being a highly valued market, especially having a strong authority in its domestic market, Indian authorities will find a way to conclude this long-pending FTA by the end of 2022, for a mutually beneficial agreement between both the countries.