Asia is the largest continent in terms of land, population and trade. Asian exporters shipped goods valued US$ 7326 billion in 2018. Asian exporters accounted for over two-fifths or about 41.7% of the overall shipments. Export value of products supplied by all continents together recorded US$ 17.585 trillion in the said year. Close behind in second place were European countries, followed by North America, South America, Africa, Oceania and Central America. Let’s have a look at Asia trade statistics with special focus on top exported commodities of all the continents. 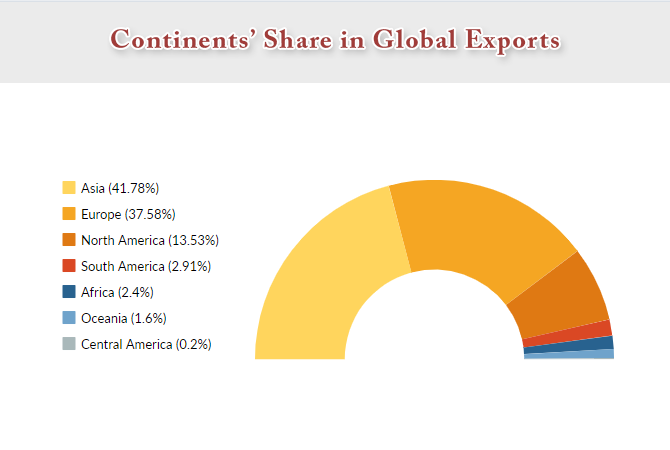 Asia undoubtedly is a dominant player in the international sales of integrated circuits and semi-conductors. According to Asian countries data, it is a top supplier of women’s clothing as well as cases, handbags and wallets. Here is the list of top 10 export commodities of Asia with statistics recorded in 2018.

The European data shows that Europe is a primary source for medical-related goods, notably drugs and medicines, blood fractions including antisera and orthopaedic appliances. Look at the top 10 export commodities of Europe with their values recorded in 2018.

North American countries exported cars the most in 2018, followed by crude petroleum oil. Have a look at top 10 export commodities of North America with statistics recorded in 2018.

South American countries exported crude petroleum oil and copper the most in 2018, followed by soya beans, iron-ores, gold, refined copper and sugar. The continent enjoyed a majority share 55.5% of globally exported copper in the said year. A list of top 10 export commodities of South America with their values is given below.

According to Africa data, the countries in this continent shipped crude petroleum oil and gold the most in 2018. The table given below shows list of top 10 exported commodities of Africa with their values recorded in the said year.

Led by Australia and New Zealand, Oceania is the world’s largest exporter of iron ore with 53% global share. Below given table shows major export commodities shipped from the countries located in Oceania.

Central America is not a continent but is an important region, which also has a share in global exports. According to Central America data, countries located into this continent exported coffee the most in 2018. Below table shows a list of products exported by Central America with their values recorded in the said year.