India is one of the biggest markets in purchasing air conditioner from the other countries of the world. India imports of air conditioner from other countries worth USD 851 million in the year 2017 while it was USD 860 million in 2016. It is mainly classified under HS Code 8415. India mainly imports air conditioners in three categories such as complete unit, outdoor unit and indoor unit. As the rupee is depreciating against the US dollars and raising the prospects of price hike by firms who depend on import of ACs components. It impacts imports, the firms pay more against the dollars and pushing them to pass to domestic customers.

According to weather department, India will see the hottest days in this year and it is assuming that people will face the more hot days than last year. In many parts of the country, you cannot survive easily with a ceiling or table fan. The number of middle income groups is increasing in India and they prefer air conditioner in their home and offices for the summer season. The AC companies record a heavy hike in their AC sales in March and April month.

In this article, we are analysing the AC import report of India on the basis of brands, types, import partners, Indian ports and importers.

In 2017, 65% of the AC imports into India have been recorded between the month of January and May. However, March and April are the peak months for AC imports. The imports have been declined heavily from June month. Refer the below table to check the monthly values of India AC imports in 2017. 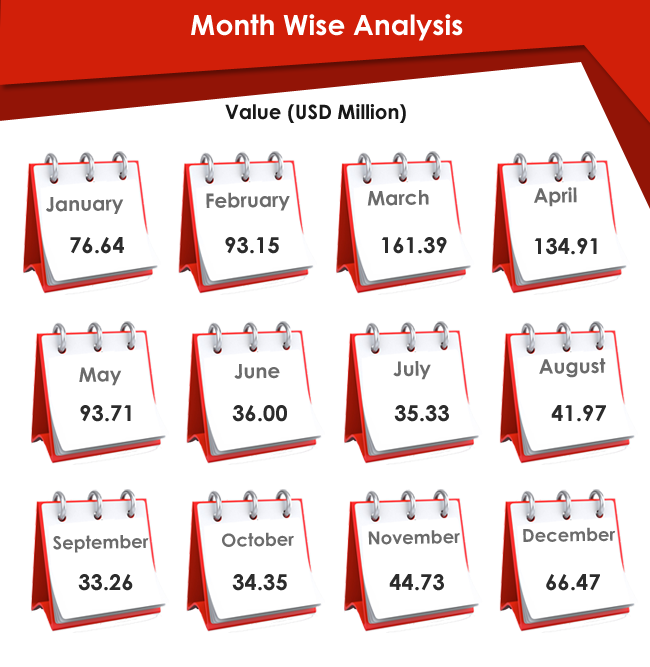 According to AC Import report of India released by Export Genius, it is recorded that more than 80 brands of ACs that India has imported in 2017. Mitsubishi, LLYOD and General, Toshiba and Voltas brand are the most demanded ACs in India. India AC imports of Mitsubishi, LLOYD and General brands stood at USD 161.80 million, USD 158.18 million and USD 138.59 million respectively during the year 2017 and together these three brands recorded 54% of the total AC imports into India.

In terms of quantity, LLOYD is the most imported brand and recorded 23.13% quantity of the total AC imports. It is followed by Mitsubishi and General AC brands which recorded 10.78% and 8.74% quantity of total shipments. Here is the table representing import figures of top five AC brands. 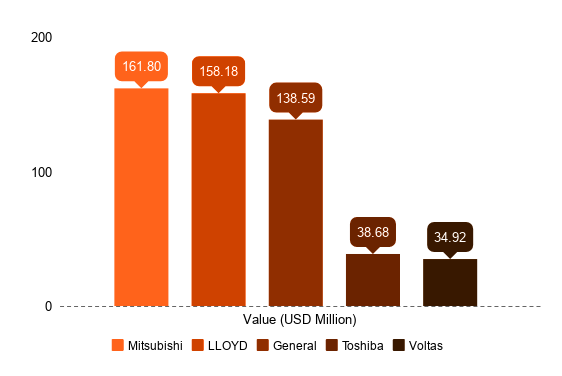 4 Types of Air Conditioner Imported by India in 2017

India has imported four types of air conditioner from the other countries such as split, window, cassatte and portable. Split air conditioners recorded highest import value i.e. USD 784.26 million which represented 92.05% of the total air conditioner imports value. Check the India import figures of different types of AC recorded in the year 2017. 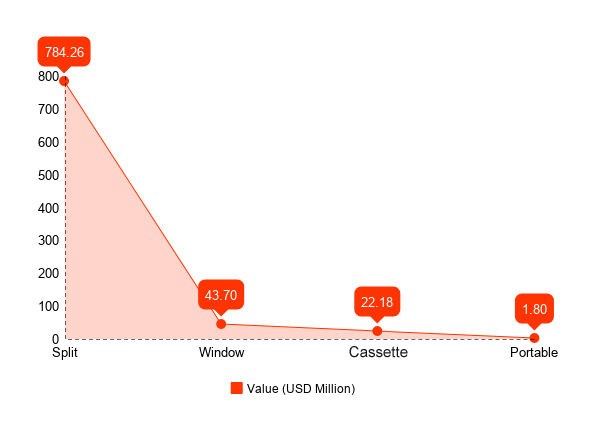 India is mainly importing air conditioner with the capacity of 1.5 ton and recorded 44.86% of the total AC imports. As we can say, AC of 1.5 ton is the most demanded among Indian population. However, it is followed by AC with the capacity of 1 ton and 2 ton which recorded 19.99% and 10.77% value of total AC imports by India during the year 2017. Check the following table and know the share value of air conditioners with their capacity.

In 2017, India has imported air conditioners from around 30 countries of the world. China, Thailand, Malaysia, Japan, Korea, Vietnam, Singapore, Italy, Chile and Australia are the AC import partners of India. China and Thailand are the biggest markets from where India import air conditioners. India AC imports from China and Thailand worth USD 490 million and USD 333 million in 2017 which is 57.61% and 39.11% value of total AC imports. Check the following table to know the 5 largest India import partners of AC with their value recorded in 2017. 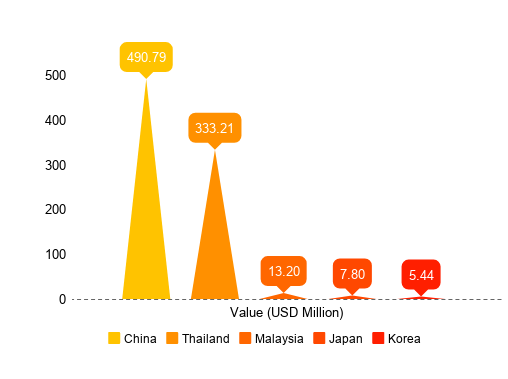 As per Air Conditioner Import Data of India, more than 300 AC companies in India importing air conditioners from other countries. ETA General Pvt Ltd is the largest air conditioner importer in India and recorded 15% value of the total AC imports in 2017. Here is the list of AC importers in India.

The AC shipments in India have arrived through 35 ports in the year 2017. Nhava Sheva Sea and Chennai Sea are the biggest ports receiving maximum AC shipments. Together these ports recorded 72.24% of the total imports and separately it is 47.18% and 25.06% respectively in the said year. Let’s check the AC import share of top Indian ports. 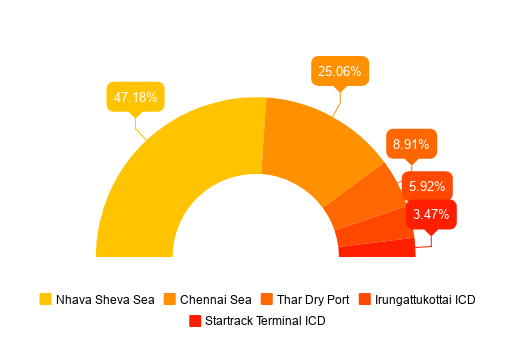 Here is the sample of India air conditioner imports including the major data fields that we cover in analytical trade report. The more columns like date, importer & exporter name, loading & unloading port will be available only after purchase. Subscribe for AC import report of India and gain the things that we have discussed below in the sample.

What will you gain from AC Import Report of India?

·         Know the price and quantity of air conditioners that India imports.

Besides India, Export Genius also provides the trade data of more than 60 countries of the world.