Dairy products, eggs, natural honey & edible products produced from animals are categorized into Chapter 04, as per Harmonized System of Nomenclature or HSN in India.  Egg is the fourth largest exported product in this chapter. From India, egg shipments valued USD 33031417, were departed from Indian ports to countries around the world between Jan-Dec 2017. As we know India supplies a wide variety of eggs globally, table eggs, hatching eggs and white shell eggs were supplied the most with 34.60%, 31.53% and 29.75% share in value registered in the given period respectively. India gives maximum egg supplies to Oman and other Middle-East countries. It also exports eggs in greater quantity to Maldives, which stood as 2nd egg trading partner of India. Let’s have a bigger and clear view of top 5 countries to which India exported eggs in 2017. 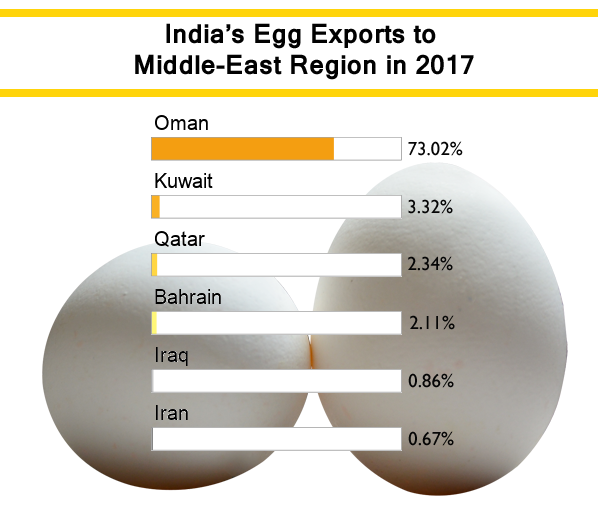 Besides Middle East countries, India also exports eggs to other nations as well including Maldives, which stood as 2nd largest purchasing country of Indian eggs during 2017. Here is the list of top 5 countries to which India supplied eggs in the said year.

Indian egg exports to Oman recorded the highest value in 2017. The country supplied eggs valued USD 24120531 to Oman during this year. Its share in value recorded 73.02%. The highest egg shipments valued USD 14831317 went from India’s Tamil Nadu to Oman. Find more stats below.

As per report on egg export data of India, Maldives stood as the 2nd largest country to which India exported eggs in 2017. The country purchased eggs worth USD 5053707 from India and recorded 15.30% share in value during this year. India supplied eggs maximum from Kerala to Maldives, which amounted to USD 4142063. Find more stats below.

India’s third largest export partner of eggs was Kuwait, which purchased eggs worth USD 1097498 in 2017. Its share in value registered 3.32%. Kuwait received most egg shipments from India’s Maharashtra state, which amounted to USD 1097498. Find more stats below.

After Kuwait, India’s maximum egg supplies worth USD 772581 went to Qatar in 2017. It recorded 2.34% share in value. India’s Tamil Nadu state shipped the highest egg products to Qatar, which valued at USD 760753. Find more stats below.

Bahrain ranked at 5th position in the list of largest countries of Indian egg exports during 2017. The country purchased eggs valued USD 698346 from India in this year. Its share in value recorded 2.11%. Bahrain received most egg shipments from India’s Tamil Nadu state, which valued at USD 665038. Find out more below.

Our report on egg industry in India is also beneficial for logistics companies who can analyse the India export data of egg and get information about Indian ports from where maximum egg shipments departing to the countries and foreign ports at which egg shipments have been arriving. Banks can increase numbers of their customers by approaching to top egg companies in India.